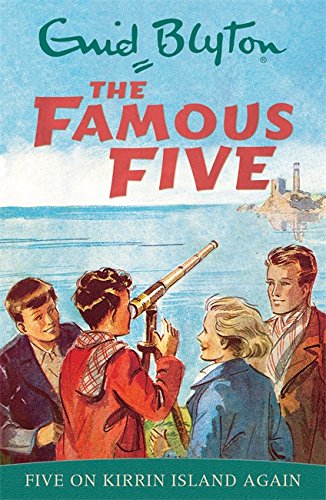 In Stock
£3.99
Julian, Dick, Anne, George and Timmy the dog find excitement and adventure wherever they go in Enid Blyton's most popular series.
Like New Very Good Good
Only 2 left

Meet Julian, Dick, Anne, George and Timothy. Together they are THE FAMOUS FIVE - Enid Blyton's most popular adventure series. All 21 titles also available as audiobooks!

In book six, Uncle Quentin has locked himself away on Kirrin Island. What's he up to and why won't he let anyone visit? Then the Famous Five discover that a suspicious stranger is watching Uncle Quentin's every move.

Can the Famous Five warn Uncle Quentin in time?

This edition features the original cover art and inside illustrations by Eileen Soper.

Enid Blyton's books have sold over 500 million copies and have been translated into other languages more often than any other children's author. She wrote over 700 books and about 2,000 short stories, including favourites such as The Famous Five,The Secret Seven, The Magic Faraway Tree, Malory Towers and Noddy. Born in London in 1897, Enid lived much of her life in Buckinghamshire and adored dogs, gardening and the countryside. She died in 1968 but remains one of the world's best-loved storytellers.

GOR010463801
Famous Five: Five On Kirrin Island Again: Book 6 by Enid Blyton
Enid Blyton
Famous Five
Used - Like New
Paperback
Hachette Children's Group
1997-03-19
208
034068111X
9780340681114
N/A
Book picture is for illustrative purposes only, actual binding, cover or edition may vary.
The book has been read, but looks new. The book cover has no visible wear, and the dust jacket is included if applicable. No missing or damaged pages, no tears, possible very minimal creasing, no underlining or highlighting of text, and no writing in the margins.