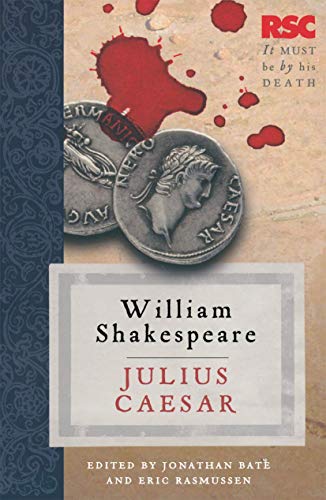 From the Royal Shakespeare Company - a modern, definitive edition of Shakespeare's drama of the conflict between one man's ambition and the good of the state.

From the Royal Shakespeare Company - a modern, definitive edition of Shakespeare's drama of the conflict between one man's ambition and the good of the state. With an expert introduction by Sir Jonathan Bate, this unique edition presents a historical overview of Julius Caesar in performance, takes a detailed look at specific productions, and recommends film versions. Included in this edition are interviews with three leading directors - Lucy Bailey, David Farr and Edward Hall - providing an illuminating insight into the extraordinary variety of interpretations that are possible. This edition also includes an essay on Shakespeare's career and Elizabethan theatre, and enables the reader to understand the play as it was originally intended - as living theatre to be enjoyed and performed.

Ideal for students, theatre-goers, actors and general readers, the RSC Shakespeare editions offer a fresh, accessible and contemporary approach to reading and rediscovering Shakespeare's works for the twenty-first century.

'A triumphant addition to our times.' - Fiona Shaw, The Times

SIR JONATHAN BATE is Professor of Shakespeare and Renaissance Literature, University of Warwick, UK, and the editor of The RSC Shakespeare: The Complete Works. He has held visiting posts at Harvard, Yale and UCLA and is a Fellow of the Royal Society of Literature, a Fellow of the British Academy, an Honorary Fellow of St Catherine's College, Cambridge, and a Governor and Board member of the Royal Shakespeare Company. A prominent critic, award-winning biographer and broadcaster, he is the author of several books on Shakespeare, including The Genius of Shakespeare (Picador), which was praised by Sir Peter Hall, founder of the RSC, as "the best modern book on Shakespeare." In June 2006 he was awarded a CBE by HM The Queen 'for services to Higher Education'.

ERIC RASMUSSEN is Professor of English at the University of Nevada, USA, and the Textual Editor of The RSC Shakespeare: The Complete Works. He is co-editor of the Norton Anthology of English Renaissance Drama and has edited volumes in both the Arden Shakespeare and Oxford World's Classics series. He is the General Textual Editor of the Internet Shakespeare Editions project - one of the most visited Shakespeare websites in the world. For over nine years he has written the annual review of editions and textual studies for the Shakespeare Survey.

Introduction.- About the Text.- Key Facts.- Julius Caesar.- Textual Notes.- Scene-by-Scene Analysis.- Julius Caesar in Performance: the RSC and Beyond.- Four Centuries of Julius Caesar: An Overview.- At the RSC.- The Director's Cut: interviews with David Farr, Edward Hall and Lucy Bailey.- Shakespeare's Career in the Theatre.- Shakespeare's Works: a Chronology.- The History Behind the Tragedies: A Chronology.- Further Reading and Viewing.- References.- Acknowledgements and Picture Credits

GOR004399653
Julius Caesar by Eric Rasmussen
Eric Rasmussen
The RSC Shakespeare
Used - Very Good
Paperback
Macmillan Education UK
2011-04-01
192
0230284108
9780230284104
N/A
Book picture is for illustrative purposes only, actual binding, cover or edition may vary.
This is a used book - there is no escaping the fact it has been read by someone else and it will show signs of wear and previous use. Overall we expect it to be in very good condition, but if you are not entirely satisfied please get in touch with us.