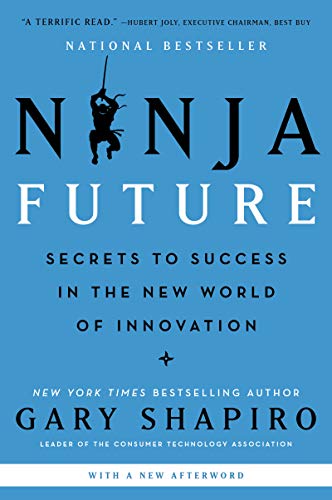 Ninja Future: Secrets to Success in the New World of Innovation by Gary Shapiro

Ninja Future is an essential read for businesses and individuals striving to remain competitive in a rapidly evolving world: Gary Shapiro, the president and CEO of the Consumer Technology Association, casts his eye toward the future, charting how the innovative technologies of today will transform not only the way business is done but society itself

During his more than three decades at the head of the Consumer Technology Association, Gary Shapiro has witnessed, and been a part of, one of the most extraordinary periods of technological change in human history. Today's world is almost unrecognizable from that of just a decade or two before: in just a few short years, the internet has already transformed how we access information, purchase goods, get from place to place, and do our jobs. And even greater changes are on the horizon.

In Ninja Future, Shapiro explains the evolving technological landscape, breakthroughs underway now and those we can only envision. New innovations such as self-driving vehicles, blockchain, 5G, the Internet of Things, and countless others will forever change the economy as we know it. Shapiro uses case studies to identify companies and countries addressing today's challenges particularly well-and relates lessons from those that have stumbled. Drawing on the insights he has gleaned as a martial arts black belt, he shows how businesses can move to succeed in today's turbulent environment by adopting the mindset of "ninjas"-adapting to technological change to capitalize on opportunities at lightning speed.

"In Ninja Future, Gary Shapiro paints a compelling picture of the accelerating pace of technology innovation, which is touching so many parts of our life, including health, home automation, and communication. Gary then goes on to provide an inspiring set of strategies to thrive in this exciting era. A terrific read for anyone working in industries touched by technology innovation, i.e., everyone!" -- HUBERT JOLY, Chairman and CEO, Best Buy

Gary Shapiro is president and CEO of the Consumer Technology Association (CTA) (TM) the U.S. trade association representing more than 2,200 consumer technology companies and which owns and produces CES (R) - The Global Stage for Innovation. As head of CTA for more than three decades, he has effectively ushered the consumer technology industry through major periods of technological upheaval and transformation. Shapiro is the New York Times best-selling author of Ninja Innovation: The Ten Killer Strategies of the World's Most Successful Businesses (Harper Collins, 2013) and The Comeback: How Innovation will Restore the American Dream (Beaufort, 2011). Through these books and through television appearances, and as a columnist whose more than 1,000 opinion pieces have appeared in publications such as The Wall Street Journal, The New York Times and The Washington Post, Shapiro has helped direct policymakers and business leaders on the importance of innovation in the U.S. economy.

GOR010214933
Ninja Future: Secrets to Success in the New World of Innovation by Gary Shapiro
Gary Shapiro
Used - Very Good
Hardback
HarperCollins Publishers Inc
2018-12-17
352
0062890514
9780062890511
N/A
Book picture is for illustrative purposes only, actual binding, cover or edition may vary.
This is a used book - there is no escaping the fact it has been read by someone else and it will show signs of wear and previous use. Overall we expect it to be in very good condition, but if you are not entirely satisfied please get in touch with us.