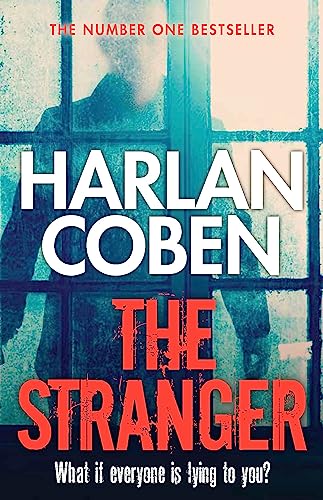 The Stranger
by Harlan Coben

In Stock
£3.99
The Sunday Times number one bestselling author delivers a shocking thriller that proves that a well-placed lie can help build a comfortable life - and a secret has the same explosive power to destroy it.
Like New Well Read
Only 1 left

The Stranger by Harlan Coben

The Stranger appears out of nowhere, perhaps in a bar, or a parking lot, or at the grocery store. His identity is unknown. His motives are unclear. His information is undeniable. Then he whispers a few words in your ear and disappears, leaving you picking up the pieces of your shattered world.

Adam Price has a lot to lose: a comfortable marriage to a beautiful woman, two wonderful sons, and all the trappings of the American Dream: a big house, a good job, a seemingly perfect life.

Then he runs into the Stranger. When he learns a devastating secret about his wife, Corrine, he confronts her, and the mirage of perfection disappears as if it never existed at all. Soon Adam finds himself tangled in something far darker than even Corrine's deception, and realizes that if he doesn't make exactly the right moves, the conspiracy he's stumbled into will not only ruin lives - it will end them...

'With clever use of technology, convincing characters and a strong emotional heart, you're effortlessly swept along to a tense and dramatic conclusion. Smart stuff from a classy operator.' -- Deirdre O'Brien * SUNDAY MIRROR *
'The master of the twisty psychological thriller is back with another awesomely gripping mystery.' -- Boyd Tonkin * HEAT *
'The twists come satisfyingly thick and fast as the plots merge before the tangled web of evens unravels into an enjoyable and somewhat surprising conclusion.' * SUNDAY EXPRESS *
A twist-filled novel of conspiracy, secrets and blackmail. -- Charlotte Heathcote * DAILY EXPRESS *

GOR007388632
The Stranger by Harlan Coben
Harlan Coben
Used - Well Read
Paperback
Orion Publishing Co
2016-01-28
400
1409103986
9781409103981
N/A
Book picture is for illustrative purposes only, actual binding, cover or edition may vary.
This is a used book. We do our best to provide good quality books for you to read, but there is no escaping the fact that it has been owned and read by someone else previously. Therefore it will show signs of wear and may be an ex library book.