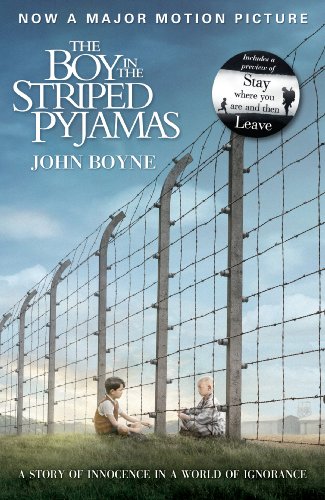 The Boy in the Striped Pyjamas
by John Boyne

In Stock
£3,29
Lines may divide us, but hope will unite us . Until he meets Shmuel, a boy who lives a strange parallel existence on the other side of the adjoining wire fence and who, like the other people there, wears a uniform of striped pyjamas.
Like New Very Good Good Well Read
Only 1 left

The Boy in the Striped Pyjamas Summary

The Boy in the Striped Pyjamas by John Boyne

Lines may divide us, but hope will unite us . . . Nine-year-old Bruno knows nothing of the Final Solution and the Holocaust. He is oblivious to the appalling cruelties being inflicted on the people of Europe by his country. All he knows is that he has been moved from a comfortable home in Berlin to a house in a desolate area where there is nothing to do and no one to play with. Until he meets Shmuel, a boy who lives a strange parallel existence on the other side of the adjoining wire fence and who, like the other people there, wears a uniform of striped pyjamas. Bruno's friendship with Shmuel will take him from innocence to revelation. And in exploring what he is unwittingly a part of, he will inevitably become subsumed by the terrible process.

The Boy in the Striped Pyjamas Reviews

"An account of a dreadful episode, short on actual horror but packed with overtones that remain in the imagination. Plainly and sometimes archly written, it stays just ahead of its readers before delivering its killer punch in the final pages" -- Nick Tucker * Independent *
"A small wonder of a book. Bruno's education is conducted slowly, through a series of fleeting social encounters rather than by plunging him into a nightmare landscape" * Guardian *
"An extraordinary tale of friendship and the horrors of war seen thorugh the eyes of two young boys, it's stirring stuff. Raw literary talent at its best. More please!" * Irish Independent *
"Quite impossible to put down, this is the rare kind of book that doesn't leave your head for days. Word of mouth should be strong and this has the potential to cross over to an adult audience. A unique and captivating novel, which I believe deserves huge success" -- Becky Stadwick * The Bookseller *
"Brilliantly written, superbly conceived novel, ending with words as bleakly ambiguous as any I have ever read. Boyne's ability to lead us on with crystal clear prose so that we unthinkingly fall into the elephant trap reminds me irresistably of another Irishman - Jonathan Swift" -- Dennis Hamley * The School Librarian *

John Boyne was born in Ireland in 1971. He is the author of eleven novels for adults, five for young readers and a collection of short stories. Perhaps best known for his 2006 multi-award-winning book The Boy In The Striped Pyjamas, John's other novels, notably The Absolutist and A History of Loneliness, have been widely praised and are international bestsellers. Most recently, The Heart's Invisible Furies was a Richard & Judy Bookclub word-of-mouth bestseller. His novels are published in over fifty languages.

GOR007760822
The Boy in the Striped Pyjamas by John Boyne
John Boyne
Used - Like New
Paperback
Random House Children's Publishers UK
2008-09-11
256
1862305277
9781862305274
N/A
Book picture is for illustrative purposes only, actual binding, cover or edition may vary.
The book has been read, but looks new. The book cover has no visible wear, and the dust jacket is included if applicable. No missing or damaged pages, no tears, possible very minimal creasing, no underlining or highlighting of text, and no writing in the margins.