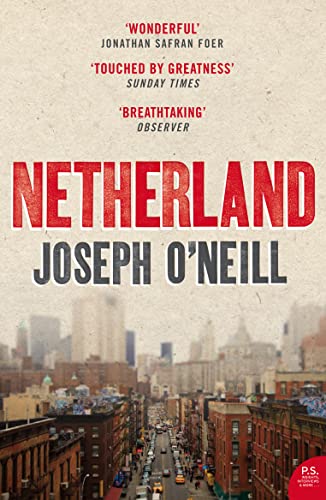 In early 2006, Chuck Ramkissoon is found dead at the bottom of a New York canal.

In early 2006, Chuck Ramkissoon is found dead at the bottom of a New York canal.

In London, a Dutch banker named Hans van den Broek hears the news, and remembers his unlikely friendship with Chuck and the off-kilter New York in which it flourished: the New York of 9/11, the powercut and the Iraq war. Those years were difficult for Hans - his English wife Rachel left with their son after the attack, as if that event revealed the cracks and silences in their marriage, and he spent two strange years in New York's Chelsea Hotel, passing stranger evenings with the eccentric residents.

Lost in a country he'd regarded as his new home, Hans sought comfort in a most alien place - the thriving but almost invisible world of New York cricket, in which immigrants from Asia and the West Indies play a beautiful, mystifying game on the city's most marginal parks. It was during these games that Hans befriends Chuck Ramkissoon, who dreamed of establishing the city's first proper cricket field. Over the course of a summer, Hans grew to share Chuck's dream and Chuck's sense of American possibility - until he began to glimpse the darker meaning of his new friend's activities and ambitions.

`Netherland' is a novel of belonging and not belonging, and the uneasy state in between. It is a novel of a marriage foundering and recuperating, and of the shallows and depths of male friendship. With it, Joseph O'Neill has taken the anxieties and uncertainties of our new century and fashioned a work of extraordinary beauty and brilliance.

`[I have] not read anything that quite so brilliantly captured the exuberant madness and cultural diversity of [New York].' Jeremy Paxman, Guardian (Books of the Year)

`There is a very special sort of gratitude you can feel for a book that is so formidably written that it has you anxious to get back to it and pining a little bit to be away from it .' Sebastian Barry, Guardian (Books of the Year)

`Too good for the Booker.' Robert McCrum, Observer (Books of the Year)

'"Netherland" is an affecting portrait of constrained love and loss, of cultural and emotional estrangement and of the difficulty of knowing others intimately...a piquant blend of vibrancy and elegy reminiscent of Paul Auster's writing.' FT

'"Netherland" is so expertly woven that it is impossible for a reader not to admire what it essentially is - a beautifully written exploration of memory and self.' Sunday Telegraph

'The wittiest, angriest, most exacting and most desolate work of fiction we've yet had about life in New York and London after the World Trade Centre fell. I devoured it in three thirsty gulps, gulps that satisfied a craving I didn't know I had. O'Neill seems incapable of composing a boring sentence or thinking an uninteresting thought.' New York Times

'Extraordinary. O'Neill is a writer of dizzying elegance.' FT

'O'Neill's novel was nominated by critics as a book of the year more times than any other title in 2008, and it's not hard to see why. Its perceptiveness and lingering air of sadness will beguile you more powerfully than you may at first expect.' Robert Collins, The Sunday Times

Joseph O'Neill is an Irish barrister living in New York. He is the author of two previous novels, `This Is the Life' and `The Breezes', as well as a memoir, `Blood-Dark Track'.

GOR001169587
Netherland by Joseph O'Neill
Joseph O'Neill
Used - Very Good
Paperback
HarperCollins Publishers
2009-01-05
300
0007275706
9780007275700
Short-listed for Galaxy British Book Awards: Richard and Judy's Best Read of the Year 2009
Book picture is for illustrative purposes only, actual binding, cover or edition may vary.
This is a used book - there is no escaping the fact it has been read by someone else and it will show signs of wear and previous use. Overall we expect it to be in very good condition, but if you are not entirely satisfied please get in touch with us.