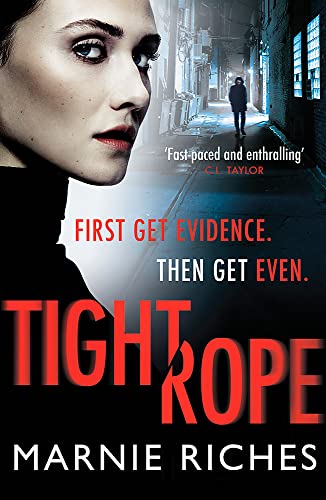 In Stock
£4.49
First get revenge... then get even. A gripping new thriller series from bestselling crime writer Marnie Riches for readers who enjoy Martina Cole, Kimberley Chambers and Jessie Keane
Very Good Good
7 in stock

Tightrope: A gritty crime thriller with a darkly funny heart by Marnie Riches

What happens when a private investigator ends up being the one uncovered?

Having lost everything after a failed marriage, Beverley Saunders now lodges in the basement flat of a house owned by her best friend Sophie and her husband, Tim. With Bev's former glittering marketing career in the gutter, she begins to do investigative work for other wronged women, gathering dirt on philanderers, bosses and exes.

But when Beverley takes on the case of Sophie's friend Angela, who is seeking to uncover grounds for divorce from her controlling husband, Jerry, the shadow Science Minister, she soon discovers that she isn't the only one doing the investigating...

Beverley has a secret history she doesn't want coming out - but will she manage to stay hidden long enough to give Angela the freedom she deserves?

Marnie Riches is back in this darkly comic thriller, perfect for fans of Martina Cole and Kimberley Chambers.

'Marnie Riches is already a leading light in the field of Mancunian noir.' The Guardian

'Gritty and great fun.' The Express

'Pacy, poignant, funny and violent, it grabs you by the hand and drags you down the mean streets of Manchester with such verve and authenticity that you can almost smell the rain and blood as you turn the pages.' Simon Toyne

Marnie Riches grew up on a rough estate in north Manchester. Exchanging the spires of nearby Strangeways prison for those of Cambridge University, she gained a Masters in German & Dutch. She has been a punk, a trainee rock star, a pretend artist and professional fundraiser.
Her best-selling, award-winning George McKenzie crime thrillers, tackling the subject of trans-national trafficking, were inspired by her own time spent in The Netherlands. Dubbed the Martina Cole of the North, she is also the author of Born Bad and The Cover-Up - the critically acclaimed hit series about Manchester's notorious gangland.
Tightrope is the start of a brand new series, set mainly in the famous footballer-belt of Hale, Cheshire, and introducing quirky northern PI, Bev Saunders who risks everything to fight the corner of her vulnerable client. A second Bev Saunders novel will follow in early 2020. So far, Marnie has sold an impressive 250,000 books and counting...
When she isn't writing gritty, twisty crime-thrillers, Marnie also regularly appears on BBC Radio Manchester, commenting about social media trends and discussing the world of crime-fiction.

GOR009947238
Tightrope: A gritty crime thriller with a darkly funny heart by Marnie Riches
Marnie Riches
Used - Very Good
Paperback
Orion Publishing Co
2019-07-09
400
1409181944
9781409181941
N/A
Book picture is for illustrative purposes only, actual binding, cover or edition may vary.
This is a used book - there is no escaping the fact it has been read by someone else and it will show signs of wear and previous use. Overall we expect it to be in very good condition, but if you are not entirely satisfied please get in touch with us.