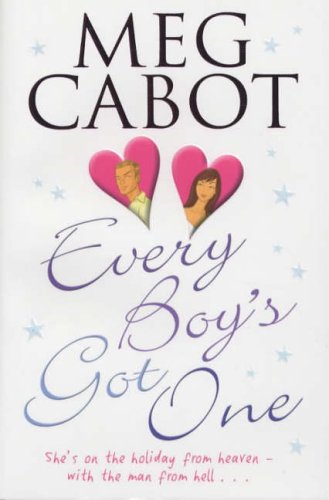 Every Boy's Got One
by Meg Cabot

Every Boy's Got One Summary

Every Boy's Got One by Meg Cabot

When cartoonist Jane Harris's best friend Holly announces that she's eloping to the Italian Riviera with longtime boyfriend Mark, and asks Jane to be her maid-of-honour, Jane jumps at the chance, delighted by the prospect of her first ever trip to Europe. What Jane doesn't gamble on is Mark's choice for best man, journalist Cal Langdon. It's hate at first sight for Jane and Cal.

But when Holly and Mark's wedding plans hit a major snag that only Jane and Cal can repair, the two find themselves having to put aside their mutual dislike for one another in order to get their best friends on the road to wedded bliss - and end up on a path neither of them ever expected to tread. . .

Told in diary form and in emails, Every Boy's Got One is a brilliant, funny and highly original follow on to the internationally successful Meg Cabot adult novels, The Guy Next Door and Boy Meets Girl.

'This tale is a hoot' Entertainment Weekly

Meg Cabot is a bestselling author of novels for both adults and children. Some of her adult novels include Size 12 is Not Fat and the Queen of Babble series. In addition to her adult novels, she is the author of the bestselling young adult series The Princess Diaries, which became a major motion picture. She lives in Florida, with her husband.

GOR000407889
Every Boy's Got One by Meg Cabot
Meg Cabot
Boy
Used - Very Good
Paperback
Pan Macmillan
2005-02-04
336
0330418882
9780330418881
N/A
Book picture is for illustrative purposes only, actual binding, cover or edition may vary.
This is a used book - there is no escaping the fact it has been read by someone else and it will show signs of wear and previous use. Overall we expect it to be in very good condition, but if you are not entirely satisfied please get in touch with us.