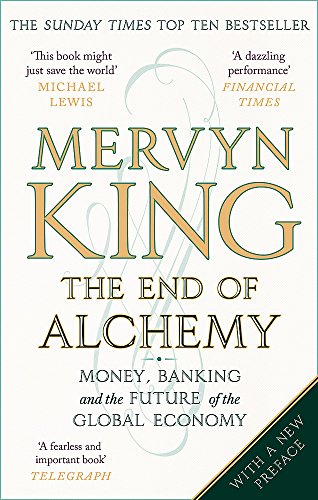 The End of Alchemy
by Mervyn King

In Stock
£8.49
The former Governor of the Bank of England argues for fundamental changes to the financial system in order to reduce the risk of a new crisis.
Very Good
6 in stock

The End of Alchemy Summary

The End of Alchemy: Money, Banking and the Future of the Global Economy by Mervyn King

'A fearless and important book . . . The End of Alchemy isn't just an elegant guide to the history of economic ideas. It also gives a genuine insider's account' Telegraph

The past twenty years saw unprecedented growth and stability followed by the worst financial crisis the industrialised world has ever witnessed. In the space of little more than a year what had been seen as the age of wisdom was viewed as the age of foolishness. Almost overnight, belief turned into incredulity.

Most accounts of the recent crisis focus on the symptoms and not the underlying causes of what went wrong. But those events, vivid though they remain in our memories, comprised only the latest in a long series of financial crises since our present system of commerce became the cornerstone of modern capitalism. Alchemy explains why, ultimately, this was and remains a crisis not of banking - even if we need to reform the banking system - nor of policy-making - even if mistakes were made - but of ideas.

In this refreshing and vitally important book, former governor of the Bank of England Mervyn King - an actor in this drama - proposes revolutionary new concepts to answer the central question: are money and banking a form of Alchemy or are they the Achilles heel of a modern capitalist economy?

The End of Alchemy Reviews

I have read umpteen books about the financial crisis of 2007-2008 and its lessons. This is the cleverest one, brimming over with new ideas. While other "lords of finance" publish memoirs, King has produced a brilliant analysis not only of what went wrong in the global financial system, but also of what went wrong in economics itself -- Niall Ferguson
An outstandingly lucid account of postwar economic policymaking and the dilemmas we now face. [King] is a master of the well-turned phrase, the apposite quote and the pungent boutade. It is rare to encounter a book on economics quite as intellectually exhilarating as The End of Alchemy - a dazzling performance indeed * Financial Times *
Mervyn King may well have written the most important book to come out of the financial crisis. From his extraordinary perspective as a brilliant economist who made policy at the highest level, he issues a clarion call for new ideas and new policies, and then delivers. Agree or disagree, King's arguments deserve the attention of everyone from economics students to heads of state -- Lawrence H. Summers
Drawing on years of scholarly study of banking history and his real world experience in fighting financial panic, Mervyn King has set out a new framework for monetary and financial reform. Seemingly simple in concept, it challenges prevailing banking and market practice. The End of Alchemy demands debate and a well-reasoned response -- Paul A. Volcker
Mervyn King asks, "Why has almost every industrialised country found it difficult to overcome the stagnation that followed the financial crisis in 2007-2008, and why did money and banking, the alchemists of a market economy, turn into its Achilles heel?" He addresses these questions, and much more. For those endeavouring to understand the greatest financial crisis of our time and the future of finance, this highly provocative book is a must read -- Alan Greenspan
A sophisticated and highly approachable study of how modern finance has lost its way. Few individuals are more qualified than Lord Mervyn King to imagine the banking of the future. His book should be required reading -- Henry Kissinger
The likes of Larry Summers, Paul Krugman, Robert Gordon, John Kay, Richard Koo and Adair Turner all need to read this book because King has something bracing to say about each of their big arguments . . . The depth of King's thinking is impressive, and he makes a powerful case for putting "radical uncertainty" at the heart of any formal attempt to model economies . . . an exceptionally thought-provoking book - and might even become a modern landmark once its many fresh ideas have percolated * Independent *
This book is by turns invigorating, terrifying and occasionally even inspiring. Its analysis is stark, its conclusions bold -- Ed Conway * The Times *
An exceptionally thought-provoking book and might even become a modern landmark once its many fresh ideas have percolated -- Ben Chu * Independent *
Wide ranging, historically informed and elegantly written . . . Like Keynes he is well aware that economics is in the end about people . . . Life is an art, not a science, and this richly rewarding treatise confirms that truth -- David Kynaston * Guardian *
This book might just save the world -- Michael Lewis * Bloomberg *
A fearless and important book . . . The End of Alchemy isn't just an elegant guide to the history of economic ideas. It also gives a genuine insider's account * Telegraph *
Fearlessly honest . . . will be read for decades to come * Telegraph *

GOR008516167
The End of Alchemy: Money, Banking and the Future of the Global Economy by Mervyn King
Mervyn King
Used - Very Good
Paperback
Little, Brown Book Group
2017-03-09
464
0349140677
9780349140674
N/A
Book picture is for illustrative purposes only, actual binding, cover or edition may vary.
This is a used book - there is no escaping the fact it has been read by someone else and it will show signs of wear and previous use. Overall we expect it to be in very good condition, but if you are not entirely satisfied please get in touch with us.