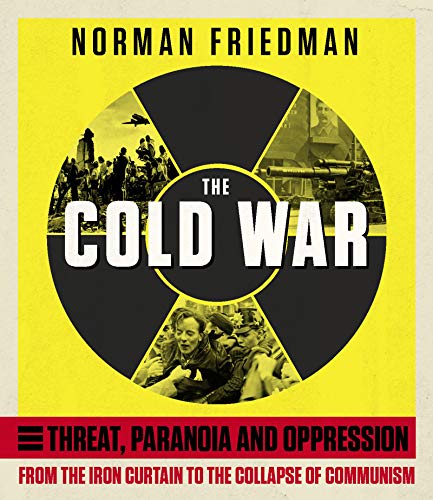 The Cold War
by Norman Friedman

The Cold War examines the events of this tense period of history - events that resonate ever strongly in this modern era of paranoia and surveillance.

The Cold War: From the Iron Curtain to the Collapse of Communism by Norman Friedman

As present-day political and military hostilities between Russia and the West threaten to escalate, The Cold War looks back at a global drama that positioned the world on the brink of nuclear Armageddon. Published 30 years after the fall of the Berlin Wall and the collapse of Communism in Europe that led to the end of the Cold War, it is a graphic account of a confrontation that encompassed moments of high tension, such as the Berlin Crisis of 1961, the Cuban Missile Crisis of 1962 and the nuclear alerts of 1973 and 1983.

Written by leading defence analyst, Dr Norman Friedman, The Cold War is a fully illustrated account of this period of crisis, subterfuge and power. Showing rare documents, such as a 1963 nuclear attack protection booklet produced for homeowners by the British government, and an official pack for US troops passing through Checkpoint Charlie, the reader can witness events as they unfolded. The result is a vivid account of a historical period that is echoed in today's geopolitical climate.

The Cold War is the perfect companion with which to examine the events of this tense period of history - events that resonate ever strongly in this modern era of paranoia and surveillance.

Dr Norman Friedman is an American defence analyst who has advised the US government on US-Soviet strategic competition and a variety of scenarios for Cold War conflict. He has written 29 books, including the award-winning The Fifty-Year War: Conflict and Strategy in the Cold War.

GOR010793760
The Cold War: From the Iron Curtain to the Collapse of Communism by Norman Friedman
Norman Friedman
Used - Like New
Hardback
Welbeck Publishing Group
2019-01-10
160
0233005714
9780233005713
N/A
Book picture is for illustrative purposes only, actual binding, cover or edition may vary.
The book has been read, but looks new. The book cover has no visible wear, and the dust jacket is included if applicable. No missing or damaged pages, no tears, possible very minimal creasing, no underlining or highlighting of text, and no writing in the margins.