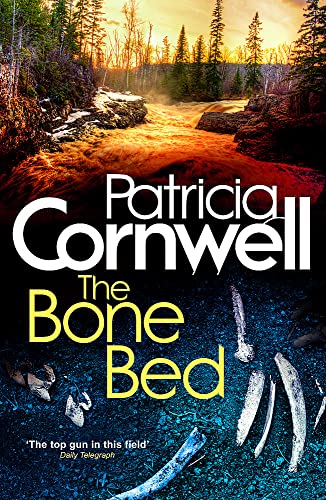 The Bone Bed
by Patricia Cornwell

In Stock
£3.99
Kay Scarpetta as you have never seen her before - a must-read for any fan of this series, or an ideal starting point for new readers
Very Good Good
10 in stock

The Bone Bed by Patricia Cornwell

The twentieth book in the Kay Scarpetta series, from No. 1 bestselling author Patricia Cornwell.

A woman has vanished while digging a dinosaur bone bed in the remote wilderness of Canada. Somehow, the only evidence has made its way to the inbox of Chief Medical Examiner Kay Scarpetta, over two thousand miles away in Boston. She has no idea why.

But as events unfold with alarming speed, Scarpetta begins to suspect the paleontologist's disappearance is connected to a series of crimes much closer to home: a gruesome murder, inexplicable tortures, and trace evidence from the last living creatures of the dinosaur age.

When she turns to those around her, Scarpetta finds that the danger and suspicion have penetrated even her closest circles. Her niece Lucy speaks in riddles. Her lead investigator Pete Marino and FBI husband Benton Wesley have secrets of their own. Feeling alone and betrayed, Scarpetta is tempted by someone from her past as she tracks a killer both cunning and cruel.

Her genuine affection for, and interest in, her main character radiates through the novel, and her research for The Bone Bed is as thorough as ever. Where Cornwell excels is in her ability to transcend the cliches and deliver a good, old fashioned thriller that has enough CSI-style touches to draw in the forensics-obsessed fan while never taking her eye off her plotting and characters * Sunday Business Post Ireland *

GOR004727573
The Bone Bed by Patricia Cornwell
Patricia Cornwell
Kay Scarpetta
Used - Very Good
Paperback
Little, Brown Book Group
2013-04-30
512
0751548170
9780751548174
N/A
Book picture is for illustrative purposes only, actual binding, cover or edition may vary.
This is a used book - there is no escaping the fact it has been read by someone else and it will show signs of wear and previous use. Overall we expect it to be in very good condition, but if you are not entirely satisfied please get in touch with us.