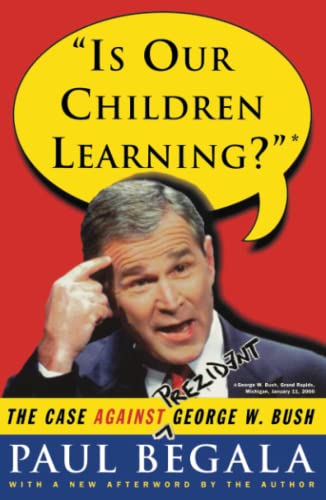 Is Our Children Learning?
by Paul Begala

Is Our Children Learning? Summary

Is Our Children Learning?: The Case Against George W. Bush by Paul Begala

He was a poor student who somehow got into the finest schools. He was a National Guardsman who somehow missed a year of service. He was a failed businessman who somehow was made rich. He was a minority investor who somehow was made managing partner of the Texas Rangers. He was a defeated politician who somehow was made governor. You can hardly blame him for expecting to inherit the White House.
"Is Our Children Learning?" examines the public life and public record of George W. Bush and reveals him for who he is: a man who presents the thinnest, weakest, least impressive record in public life of any major party nominee this century; a man who at every critical juncture has been propelled upward by the forces of wealth, privilege, status, and special interests who use his family's name for their private gain.
A Texan, political analyst, strategist, and partisan, Paul Begala has written a devastating assessment of the Bush brand of politics.

Is Our Children Learning? Reviews

James Carville Every Democrat should memorize this book, every Independent should read it, and every Republican should fear it.

Paul Begala was a chief strategist for the 1992 Clinton-Gore campaign, which carried thirty-three states and made Bill Clinton the first Democrat to win the White House in sixteen years. He served as counselor to the president in the Clinton White House, where he coordinated policy, politics, and communications. He is the author of four books, including Is Our Children Learning?: The Case Against George W. Bush; It's Still the Economy, Stupid; and Buck Up, Suck Up...and Come Back When You Foul Up (with James Carville). Begala is a CNN political commentator and a research professor of public policy at Georgetown University's Public Policy Institute. Paul earned both his undergraduate and law degrees from the University of Texas, where he was student body president. He and his wife live quietly in Virginia with their four boys and a German shepherd. (Okay, so they don't live too quietly.)

GOR008289252
Is Our Children Learning?: The Case Against George W. Bush by Paul Begala
Paul Begala
Used - Very Good
Paperback
Simon & Schuster
2000-09-20
160
0743214781
9780743214780
N/A
Book picture is for illustrative purposes only, actual binding, cover or edition may vary.
This is a used book - there is no escaping the fact it has been read by someone else and it will show signs of wear and previous use. Overall we expect it to be in very good condition, but if you are not entirely satisfied please get in touch with us.