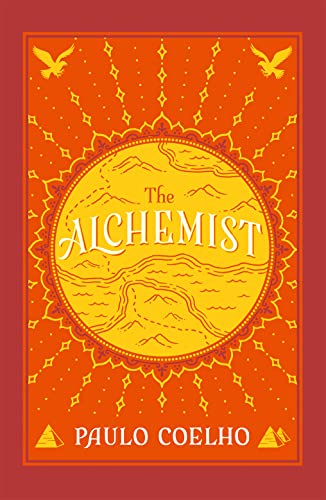 The Alchemist
by Paulo Coelho

A global phenomenon, The Alchemist has been read and loved by over 62 million readers, topping bestseller lists in 74 countries worldwide. Now this magical fable is beautifully repackaged in an edition that lovers of Paulo Coelho will want to treasure forever.

The Alchemist by Paulo Coelho

A global phenomenon, The Alchemist has been read and loved by over 62 million readers, topping bestseller lists in 74 countries worldwide. Now this magical fable is beautifully repackaged in an edition that lovers of Paulo Coelho will want to treasure forever.

Every few decades a book is published that changes the lives of its readers forever. This is such a book - a beautiful parable about learning to listen to your heart, read the omens strewn along life's path and, above all, follow your dreams.

Santiago, a young shepherd living in the hills of Andalucia, feels that there is more to life than his humble home and his flock. One day he finds the courage to follow his dreams into distant lands, each step galvanised by the knowledge that he is following the right path: his own. The people he meets along the way, the things he sees and the wisdom he learns are life-changing.

With Paulo Coelho's visionary blend of spirituality, magical realism and folklore, The Alchemist is a story with the power to inspire nations and change people's lives.

`His books have had a life-enhancing impact on millions of people.' THE TIMES

`One of the few to deserve the term Publishing Phenomenon.' INDEPENDENT ON SUNDAY

`Coelho's writing is beautifully poetic but his message is what counts... he gives me hope and puts a smile on my face.' DAILY EXPRESS

`I love The Alchemist.' OPRAH WINFREY

`The Alchemist is a beautiful book about magic, dreams and the treasures we seek elsewhere and then find on our doorstep.' MADONNA

"I feel like the luckiest man on the planet. It's a dream come true for me," to be able to direct and star and bring Coelho's book to the screen." LAURENCE FISHBURNE on the upcoming film adaptation of The Alchemist

"One of my favourite books is The Alchemist by Paulo Coelho, and I just believe that...I can create whatever I want to create. If I can put my head on it right, study it, learn the patterns...I feel very strongly that we are who we choose to be." WILL SMITH

"When I'm on the set with young actors and sometimes you meet people in life who you feel they are a little confused and they want to be re-centered, there are two books that I always recommend. One of them is Siddhartha, and the other is The Alchemist. RUSSELL CROWE

Paulo Coelho was born in Brazil and has become one of the most widely read and loved authors in the world. Especially renowned for The Alchemist and Eleven Minutes, he has sold more than 115 million copies worldwide and been translated into over 71 languages. The recipient of numerous prestigious international awards, including the Crystal Award by the World Economic Forum and France's Legion d'Honneur, Paulo Coelho was inducted into the Brazilian Academy of Letters in 2002.

GOR000826987
The Alchemist by Paulo Coelho
Paulo Coelho
Used - Very Good
Paperback
HarperCollins Publishers
1995-11-13
224
0722532938
9780722532935
Runner-up for The BBC Big Read Top 100 2003 Short-listed for BBC Big Read Top 100 2003
Book picture is for illustrative purposes only, actual binding, cover or edition may vary.
This is a used book - there is no escaping the fact it has been read by someone else and it will show signs of wear and previous use. Overall we expect it to be in very good condition, but if you are not entirely satisfied please get in touch with us.