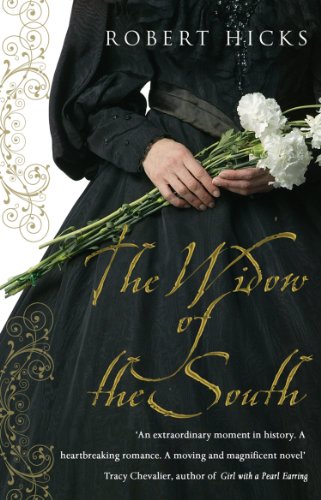 The Widow of the South
by Robert Hicks

In Stock
£2.99
None will be more changed than Carrie McGavock, who finds her home taken over by the Confederate army and turned into a field hospital. Taking charge, she finds the courage to face up to the horrors around her and, in doing so, finds a cause.
Very Good
Only 2 left

The Widow of the South Summary

The Widow of the South by Robert Hicks

Tennessee, 1864. On a late autumn day, near a little town called Franklin, 10,000 men will soon lie dead or dying in a battle that will change many lives for ever. None will be more changed than Carrie McGavock, who finds her home taken over by the Confederate army and turned into a field hospital. Taking charge, she finds the courage to face up to the horrors around her and, in doing so, finds a cause. Out on the battlefield, a tired young Southern soldier drops his guns and charges forward into Yankee territory, holding only the flag of his company's colours. He survives and is brought to the hospital. Carrie recognizes something in him - a willingness to die - and decides on that day, in her house, she will not let him. In the pain-filled days and weeks that follow, both find a form of mutual healing that neither thinks possible. In this extraordinary debut novel based on a true story, Robert Hicks has written an epic novel of love and heroism set against the madness of the American Civil War.

The Widow of the South Reviews

"'It is a wonderful novel about what war does to its participants - not only the soldiers, but the families pulled from the periphery onto the battlefield. Hicks has perfected the art of mixing fact and fiction, and turned the book into a sustained, profound meditation on what it means to live, to love and to die. Congratulations to Robert Hicks - he has written a moving and magnificent novel'" * Tracy Chevalier, author of Girl with a Pearl Earring *
"A wonderful read. Blends the historical and the personal with a master stroyteller's skill" * San Francisco Chronicle *
"Written with lyrical beauty, arresting images as well as a compelling storyline" * People *
"Based on fact and meticulously researched, it is a moving novel. Robert Hicks is a superb storyteller." * Choice *
"'A sleeping giant'" * USA Today *

Robert Hicks has been a leading member of the Nashville music industry for twenty years, as both a publisher and artist manager, working with stars such as Dolly Parton and Keith Richard. For twenty-five years Robert has been the driving force in the preservation and restoration of the Historic Carnton Plantation in Franklin, Tennessee. While working on the preservation of Carnton, he discovered old diaries, scrapbooks, letters and yellowed newspaper clippings and began to piece together the story of Carrie McGavock. Widow of the South is his first novel.

GOR002646597
The Widow of the South by Robert Hicks
Robert Hicks
Used - Very Good
Paperback
Transworld Publishers Ltd
2006-08-01
544
0552773409
9780552773409
N/A
Book picture is for illustrative purposes only, actual binding, cover or edition may vary.
This is a used book - there is no escaping the fact it has been read by someone else and it will show signs of wear and previous use. Overall we expect it to be in very good condition, but if you are not entirely satisfied please get in touch with us.