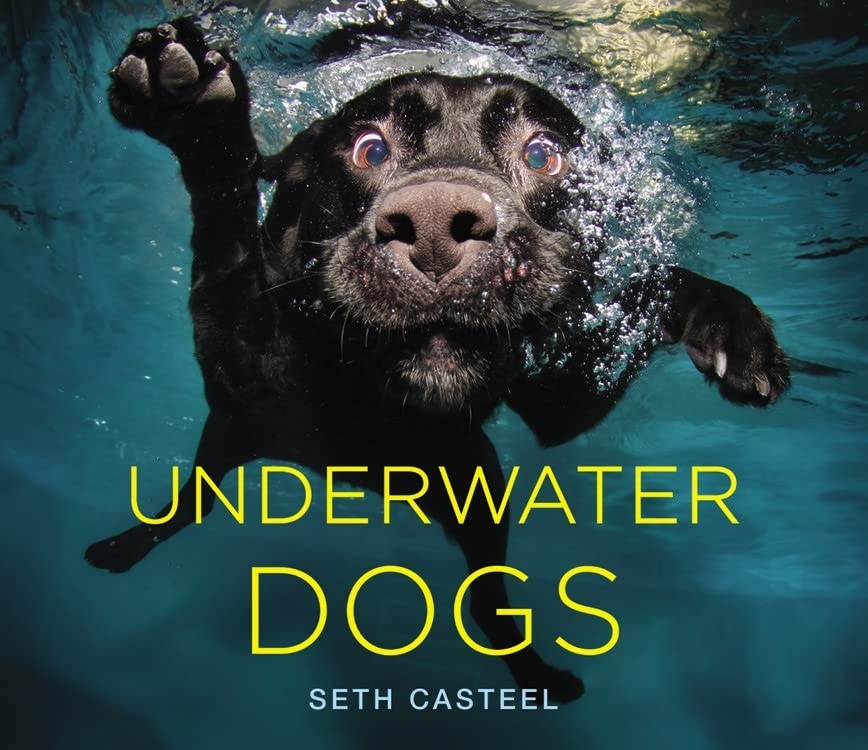 In Stock
£3.99
From leaping lab to diving dachshund, the water is where a dog's distinct personality shines through. These 80 portraits by award-winning pet photographer and animal rights activist Casteel capture new sides of old friends with vibrant underwater photography.
Very Good
Only 1 left

The exuberant, exhilarating photographs of dogs underwater that have become a sensation

From the water's surface, it's a simple exercise: a dog's leap, a splash, and then a wet head surfacing with a ball, triumphant.

But beneath the water is a chaotic ballet of bared teeth and bubbles, paddling paws, fur and ears billowing in the currents. From leaping Lab to diving Dachshund, the water is where a dog's distinct personality shines through; some lounge in the current, paddling slowly, but others arch their bodies to cut through the water with the focus and determination of a shark.

In more than eighty portraits, award-winning pet photographer and animal rights activist Seth Casteel captures new sides of our old friends with vibrant underwater photography that makes it impossible to look away. Each image bubbles with exuberance and life, a striking reminder that even in the most loveable and domesticated dog, there are more primal forces at work. In Underwater Dogs, Seth Casteel gives playful and energetic testament to the rough-and-tumble joy that our dogs bring into our lives.

Included in O, The Oprah Magazine's holiday gift guide, Entertainment Weekly's best-selling gift books list, and The Star-Ledger's holiday gift guide.
Seth Casteel's photographs are "a global phenomenon." -- Wired
"A great coffee table book." -- The Huffington Post
"The arresting portraits in Seth Casteel's Underwater Dogs reveal what's happening below the surface. Teeth gnashing, paws paddling, primal and hilarious, these canines bubble with irresistible energy." -- O, The Oprah Magazine
"Wide-eyed, wet-haired dog portraiture." -- Los Angeles Times
"Alternately gorgeous and terrifying, but always visually sumptuous." -- Entertainment Weekly
"The most popular photography book of 2012." -- The San Francisco Chronicle
"Award-winning photographer Casteel captures his range of subjects with great affection and the variety of expressions and acrobatic poses will keep you chuckling for hours." -- The Daily Mail
"Photographer Seth Casteel has done an unimaginable thing: he's created an entire photography book of dogs from an underwater perspective, and the photos are simply stunning.... Casteel is not only an animal lover but also an animal rescuer, and his genuine love of dogs shines through in his work." -- Babble Pets
"Surprising and funny." -- New York Times
"These pictures are amazing and sometimes terrifying." -- The New York Times Book Review's "Inside the List"
"Seth Casteel's photos of dogs diving into swimming pools in hot pursuit of neon tennis balls have been a sensation." -- Washington Post
"The gorgeous, energetic snapshots are special in that they capture our pets in a primal state we rarely get to see." -- Entertainment Weekly's Shelf Life
"Every image in this fetching work bubbles with life, reminding the reader that even in the most lovable and domesticated dog, there may be more primal forces at work." -- Publishers Weekly
"If you're as much of a sucker for great animal photos as I am, you'll love this different take on man's best friend." -- Melanie Stetson Freeman, Christian Science Monitor
"These aqua-doggies are guaranteed to bring a smile to almost any face as they become a whimsically single-minded parade of bared teeth and whooshing paws going after the balls and other objects that Casteel tossed into his pool just before clicking away on his underwater camera." -- American Profile
"It's impossible to look at Under-water Dogs without smiling.... A delight-inducing book." -- BookPage

Seth Casteel is an award-winning photographer and the author of the national bestseller Underwater Dogs and Underwater Puppies. His series of underwater dog photographs have brought him worldwide attention, entertaining and bewildering millions of animal lovers. As an established member of the animal rescue community, Seth has been recognized by TIME Magazine, The Today Show, and The Humane Society of the United States for his efforts, and his underwater dog photographs have been featured in The New York Times, on Animal Planet, and in hundreds of other outlets. He lives in California.

GOR005004151
Underwater Dogs by Seth Casteel
Seth Casteel
Used - Very Good
Paperback
Unknown
0
0316227706
9780316227704
N/A
Book picture is for illustrative purposes only, actual binding, cover or edition may vary.
This is a used book - there is no escaping the fact it has been read by someone else and it will show signs of wear and previous use. Overall we expect it to be in very good condition, but if you are not entirely satisfied please get in touch with us.