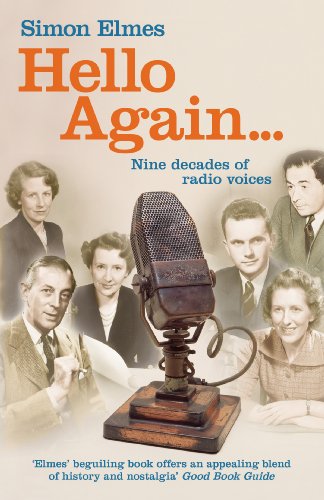 In Stock
£4.49
It's now ninety years since the BBC made its first broadcast and the British love affair with radio began. all the way up to Eddie Mair, Fi Glover and Danny Baker, the much-loved voices of today.
Very Good
Only 1 left

It's now ninety years since the BBC made its first broadcast and the British love affair with radio began. This book is a journey through that fascinating history and a celebration of the many wonderful voices that were part of it: Marion Cran, who pioneered the first gardening programme in the 1920s; The Goons and Kenneth Horne, comedy greats of the 1950s; John Peel, Alan Freeman, Kenny Everett and other heroes of the pirate stations; all the way up to Eddie Mair, Fi Glover and Danny Baker, the much-loved voices of today. A delightful blend of insight, history and nostalgia, Hello Again will appeal to any radio aficionado.

"A lovely book, especially for those who, even when we throw the tea towel at it, still love the radio" -- Gillian Reynolds * Daily Telegraph *
"Pulses with [Elmes'] own love of the medium ... an engaging read" * Scotsman *
"Elmes' beguiling book offers an appealing blend of history and nostalgia" * Good Book Guide *
"[A] charming history of the call signs, catch-phrases, repetitions and modulations of tone that make up the world of the radio ... The stories behind the voices are told with real affection for the subject" * Who Do You Think You Are? Magazine *
"[A] fascinating book charting the story of the great and forgotten names of radio from today and the last nine decades" * Full House magazine *

SIMON ELMES is Creative Director of the BBC's Radio Documentary Unit, where he oversees a wide range of programmes. He was Executive Producer of the long-running magazine Word of Mouth, from its inception until 2004. In 1996 it was awarded one of the world's premier broadcasting prizes, the Premio Ondas. He produced the award-winning The Routes of English, a 26-part series on the history of the English language, and has written four books to accompany the series. He also produced the 2005 radio and TV project Voices.

GOR005015922
Hello Again: Nine decades of radio voices by Simon Elmes
Simon Elmes
Used - Very Good
Paperback
Cornerstone
2013-05-15
384
0099559781
9780099559788
N/A
Book picture is for illustrative purposes only, actual binding, cover or edition may vary.
This is a used book - there is no escaping the fact it has been read by someone else and it will show signs of wear and previous use. Overall we expect it to be in very good condition, but if you are not entirely satisfied please get in touch with us.