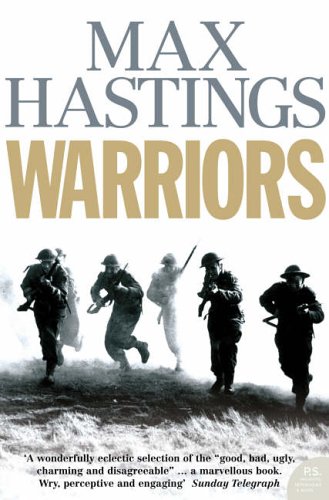 An exhilarating and uplifting account of the lives of sixteen `warriors' from the last three centuries, hand-picked for their bravery or extraordinary military experience by the eminent military historian, author and ex-editor of the Daily Telegraph, Sir Max Hastings.

Warriors: Extraordinary Tales from the Battlefield by Sir Max Hastings

An exhilarating and uplifting account of the lives of sixteen `warriors' from the last three centuries, hand-picked for their bravery or extraordinary military experience by the eminent military historian, author and ex-editor of the Daily Telegraph, Sir Max Hastings.

Over the course of forty years of writing about war, Max Hastings has grown fascinated by outstanding deeds of derring-do on the battlefield (land, sea or air) - and by their practitioners. He takes as his examples sixteen people from different nationalities in modern history - including Napoleon's `blessed fool' Baron Marcellin de Marbot (the model for Conan Doyle's Brigadier Gerard); Sir Harry Smith, whose Spanish wife Juana became his military companion on many a campaign in the early 19th-century; Lieutenant John Chard, an unassuming engineer who became the hero of Rorke's Drift in the Zulu wars; and Squadron Leader Guy Gibson, the `dam buster' whose heroism in the skies of World War II earned him the nation's admiration, but few friends.

Every army, in order to prevail on the battlefield, needs a certain number of people capable of courage beyond the norm. In this book Max Hastings investigates what this norm might be - and how it has changed over the centuries. While celebrating feats of outstanding valour, he also throws a beady eye over the awarding of medals for gallantry - and why it is that so often the most successful warriors rarely make the grade as leaders of men.

`With this collection, Hastings is back on home territory, where he can bring his unique blend of skills as war reporter, and social as well as military historian to bear...This is one of the best and most diverting of his shorter pieces' Evening Standard

`All (of the stories) are corking...opinions are stated firmly and with big bold swings of the pendulum. His virtues are clarity and decisiveness - greatly to be admired when it comes to making clear, for the lay reader, roughly what is going on in the fiendishly complex and bloody engagements he describes.' Spectator

`A wonderfully eclectic selection...Hastings has written a marvellous book. Wry perceptive and engaging, it lays bare the curious mix of character traits - good and bad - that a successful warrior requires.' Sunday Telegraph

`His brisk prose has the qualities of his warriors: clear, decisive, forceful..."Warriors" will enthral everyone.' Daily Telegraph

`Brilliant...Hastings combines his consummate skill as a writer with passages of descriptive brilliance to provide a book for the ordinary citizen...He captures the commitment of the fighting servicemen and women...in language that is powerful yet eminently comprehensible. This is a book to entertain.' Sunday Times

GOR000885464
Warriors: Extraordinary Tales from the Battlefield by Sir Max Hastings
Sir Max Hastings
Used - Very Good
Paperback
HarperCollins Publishers
2006-03-06
384
000719885X
9780007198856
N/A
Book picture is for illustrative purposes only, actual binding, cover or edition may vary.
This is a used book - there is no escaping the fact it has been read by someone else and it will show signs of wear and previous use. Overall we expect it to be in very good condition, but if you are not entirely satisfied please get in touch with us.