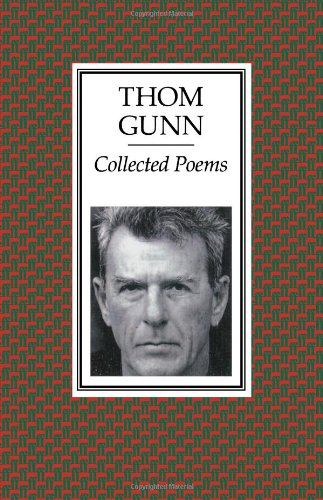 Out of Stock
£8.99
Gunn's work illustrates the debates poetry in English has pursued in this century - form versus improvization, diction versus talk, the American way versus the English tradition, and even, at times, authenticity versus art.
Very Good Good
Only 0 left

In his [Collected Poems] Thom Gunn has assembled all the work he considers worthy from throughout his remarkable career. Gunn's first book, Fighting Terms (1954), was quickly identified in The Cambridge Review as "one of the few volumes of post-war verse that all serious readers of poetry need to possess and study", and in the four decades since, he has come to be recognized as one of the finest poets writing in English. Collected Poems establishes the breadth and formal catholicity of his work, from the classically inspired early poems to the stylistically exuberant poems of the 1960s to the elegiac rhymed verse of The Man with Night Sweats (1992), in which, as John Updike wrote in The New Yorker, "the tension of Gunn's famous earlier poems...has become muted and commemorative". Born in 1929 and raised in Britain, Gunn has lived in northern California since 1954, and he describes himself as an Anglo-American poet. His poetry is likewise a mixture of apparently discordant elements, and he has made a specialty of playing style against subject, dealing with the out-of-control through tightly controlled meters and with the systematized through open forms. Some of the contents of Collected Poems has been out of print for many years. This gathering together of the full range of Thom Gunn's work reveals the enormous extent of his creative achievement.

"[Gunn] has always been elusive, hard to place both as to nationality and as to poetic affiliation. His "Collected Poems" are sane, accessible, impressive in their versification and command of language--testaments to intelligence, warmth, and integrity."--Richard Tillinghast, "The New York Times Book Review"
"[Gunn is] an exceptional and fascinating poet with a formal range to rival Auden's, a sensuality to rival Ginsberg's, and a profound yet daily humanity that surely surpassess that of any other poet of our times . . . [There is] a unity of purpose that extends throughout [this] work, from the watchful early metrics through the syllabics, the reach and skill of the free verse and, in much of the latest work, a return to strong form that might be termed triumphant had it not been called into the service of matter so saddening. Always Gunn has written from that lost and loving center between brain and body, which thinks while it feels, and feels while it learns: that species of po

Thom Gunn was born in Gravesend, Kent in 1929. After National Service and a short time living in Paris, he enrolled at Trinity College, Cambridge, where he read English. He published his first book of poems, Fighting Terms, while he was still an undergraduate. In 1954 he moved to San Francisco and held a one-year Fellowship at Stanford University. He published over thirty books of poetry, including The Man with Night Sweats, which won the Forward Prize for Poetry in 1992, and Boss Cupid (2000). Thom Gunn died in 2004.