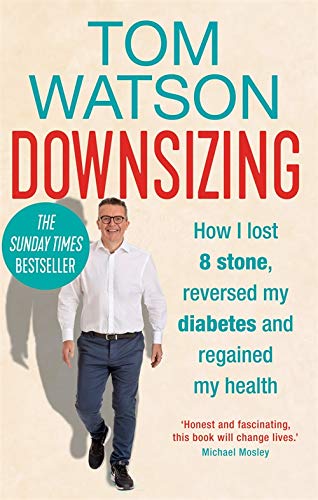 In Stock
£9.99
An honest, frank and inspiring account of how Tom Watson lost more than 8 stone and reversed his type 2 diabetes
Like New Very Good
Only 1 left

Downsizing: How I lost 8 stone, reversed my diabetes and regained my health - THE SUNDAY TIMES BESTSELLER by Tom Watson

'An honest and fascinating account of the journey that Tom made from discovering he was a type 2 diabetic to doing something about it. This book will change lives.' Michael Mosley

'Two years ago I turned 50, weighed 22 stone and was heavily medicated for type 2 diabetes. I thought it would be all downhill from there. By radically changing my nutrition, cutting out sugar, and taking up exercise, I've changed my life and reversed my diabetes. I hope my story will inspire others to regain their health and happiness and discover the new lease of life I'm experiencing.'

Tom Watson began to put on weight in his early twenties, having developed an appetite for fast food and cheap beer while studying at the University of Hull. As time progressed - and his penchant for anything sweet, fatty or fizzy persisted - he found himself adjusting his belt, loosening his collar and upsizing his wardrobe to XXL. He continued to pile on the pounds when he entered the world of politics as MP for West Bromwich East (despite short-lived flirtations with fad diets and fitness classes). By December 2014, his bathroom scales had tipped to 22 stone. After being diagnosed with type 2 diabetes in late 2015, he decided to take control of his diet and exercise. He started to feel better quickly and within a short time his long-term blood sugar levels were within normal range. By July 2018, he came off medication.

Tom served as MP for West Bromwich East from 2001 until 2019 and was Deputy Leader of the Labour Party from 2015 to 2019. He first folded Labour Party leaflets in the family kitchen in Kidderminster at the age of seven and has been involved in every single General Election since then. Tom served as a Minister for Tony Blair and worked at the very heart of Downing Street with Gordon Brown. He is well known as a campaigning politician. He took on the tabloid newspaper industry during the phone hacking scandal and more recently has campaigned against exploitative and addictive practises in the gambling industry. After changing his diet and getting fit, Tom now has the sugar industry in his sights and is committed to raising awareness about the dangers of excess and hidden sugars, and improving public understanding about conditions like type 2 diabetes.

GOR010316946
Downsizing: How I lost 8 stone, reversed my diabetes and regained my health - THE SUNDAY TIMES BESTSELLER by Tom Watson
Tom Watson
Used - Like New
Hardback
Octopus Publishing Group
2020-01-02
256
0857838334
9780857838339
N/A
Book picture is for illustrative purposes only, actual binding, cover or edition may vary.
This is a used book - there is no escaping the fact it has been read by someone else and it will show signs of wear and previous use. Overall we expect it to be in very good condition, but if you are not entirely satisfied please get in touch with us.