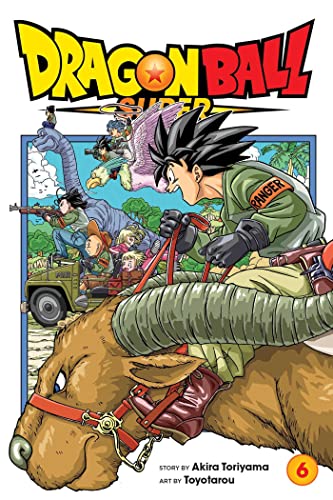 Goku's adventure from the best-selling classic manga Dragon Ball continues in this new series written by Akira Toriyama himself!

Ever since Goku became Earth's greatest hero and gathered the seven Dragon Balls to defeat the evil Boo, his life on Earth has grown a little dull. But new threats loom overhead, and Goku and his friends will have to defend the planet once again in this continuation of Akira Toriyama's best-selling series, Dragon Ball!

The Zen Exhibition Match continues and all of the Gods of Destruction seem to really want a piece of Beerus. But the Lords of Everything quickly grow bored of the chaos and opt for a much simpler exhibition match: Goku vs. Toppo from Universe 11. Toppo is strong! So much so that even Goku struggles against him. And Toppo isn't even Universe 11's strongest warrior! That title belongs to Jiren. With the Tournament of Power looming in the near future, Universe 7 already seems to be at a huge disadvantage! Will they be able to put together a team in time to overcome this gap in power?!

Renowned worldwide for his playful, innovative storytelling and humorous, distinctive art style, Akira Toriyama burst onto the manga scene in 1980 with the wildly popular Dr. Slump. His hit series Dragon Ball (published in the U.S. as Dragon Ball and Dragon Ball Z) ran from 1984 to 1995 in Shueisha's Weekly Shonen Jump magazine. He is also known for his design work on video games such as Dragon Quest, Chrono Trigger, Tobal No. 1 and Blue Dragon. His recent manga works include COWA!, Kajika, Sand Land, Neko Majin, Jaco the Galactic Patrolman and a children's book, Toccio the Angel. He lives with his family in Japan.

Toyotarou created the manga adaptation for the Dragon Ball Z anime's 2015 film, Dragon Ball Z: Resurrection F. He is also the author of the spin-off series Dragon Ball Heroes: Victory Mission, which debuted in V-Jump in Japan in November 2012.

GOR010220972
Dragon Ball Super, Vol. 6 by Toyotarou
Toyotarou
Dragon Ball Super
Used - Very Good
Paperback
Viz Media, Subs. of Shogakukan Inc
2019-09-19
192
197470520X
9781974705207
N/A
Book picture is for illustrative purposes only, actual binding, cover or edition may vary.
This is a used book - there is no escaping the fact it has been read by someone else and it will show signs of wear and previous use. Overall we expect it to be in very good condition, but if you are not entirely satisfied please get in touch with us.