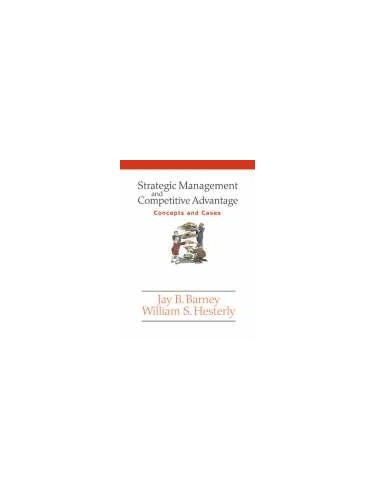 Out of Stock
Intended for professors who want students to see connections between big ideas in strategy, this work provides an organizing framework (VRIO) as the foundation of the text. It provides the decision-making framework for students to use in analyzing cases and business situations.
Very Good
Only 0 left

For professors who want students to see connections between big ideas in strategy (thus understanding vs. memorizing), Barney/Hesterly provides an organizing framework (VRIO) as the foundation of the text. Students have a clear decision-making framework to use in analyzing cases and business situations.

Professor Barney teaches business policy and strategy at Ohio State. He has also taught in a variety of executive programs at Ohio State, Texas A&M, UCLA, Southern Methodist University, Texas Christian University, the University of Michigan, Bocconi University (in Milan, Italy), and for the consulting firm McKinsey and Company. He has received teaching awards at UCLA (1983), Texas A&M (1992), and Ohio State (1995, 1996, 1999, 2000, and 2001).

Professor Barney's research focuses on the relationship between firm resources and capabilities and sustained competitive advantage. He has published over 75 articles in a variety of books and journals. His 1986 Management Science article was recently cited as one of the 50 most influential pieces ever published in that journal, and his 1991 Journal of Management article was recently identified as the second most cited reference in papers published in the Strategic Management Journal from 1994 - 2001. His 1997 Journal of Business Venturing article with Professor Lowell Busenitz (University of Oklahoma) is the most highly cited article published in that journal over the last ten years. Professor Barney has delivered scholarly papers at over 50 universities around the world-including the Harvard Business School, the Wharton School of Business, Northwestern University, and the London Business School. Professor Barney won the College of Business Distinguished Research Award at Texas A&M in 1992; presented the Holger Crafoord Memorial Lecture at Lund University in Lund, Sweden in 1993; received an honorary doctorate degree from Lund University in 1997; and was appointed an Honorary Visiting Professor at Waikato University in Hamilton, New Zealand in 2001. In 2001 he was also elected as a Fellow in the Academy of Management.

Professor Barney has also consulted with a wide variety of public and private organizations, including Hewlett Packard, Texas Instruments, Tenneco, Arco, McKinsey and Company, Nationwide, and the Columbus Public Schools.

William Hesterly is the Zeke Dumke Professor of Management in the David Eccles School of Business, the University of Utah. He has twice been selected as the outstanding teacher in the MBA program (1992 and 1997) and also received the Student's Choice Award in 1994. He received the Western Academy of Management Ascendant Scholar Award in 1999. Dr. Hesterly has also received best paper awards from the Western Academy of Management and the Academy of Management. His research on organizational economics, vertical integration, organizational forms, and entrepreneurial networks has appeared in leading journals including the Academy of Management Review, Organization Science, Strategic Management Journal, the Journal of Management, and the Journal of Economic Behavior and Organization. Currently, he is studying the sources of value creation in firms and also what determines who capture the value form a firm's competitive advantage. His research on the history of innovation in Major League Baseball recently appeared in the journal Business History. Dr. Hesterly serves on the editorial board of Strategic Organization and has previously served on the boards of Organization Science and the Journal of Management. He has served as Department Chair and also Vice-President and President of the faculty at the David Eccles School of Business at the University of Utah.

Professor Hesterly has served as a consultant to Fortune 500 firms in the electronic, office equipment, paper, telecommunications, energy, aerospace, and medical equipment industries. He has also consulted with smaller firms in several other industries.

After studying at Louisiana State University, he received bachelors and masters degrees from Brigham Young University and a Ph.D. from the University of California, Los Angeles.

PART ONE: The Tools of Strategic Analysis

Chapter 1 What Is Strategy and the Strategic Management Process?

GOR003888202
Strategic Management and Competitive Advantage: Concepts and Cases by William S. Hesterly
William S. Hesterly
Used - Very Good
Hardback
Pearson Education (US)
2005-06-27
640
0131542745
9780131542747
N/A
Book picture is for illustrative purposes only, actual binding, cover or edition may vary.
This is a used book - there is no escaping the fact it has been read by someone else and it will show signs of wear and previous use. Overall we expect it to be in very good condition, but if you are not entirely satisfied please get in touch with us.