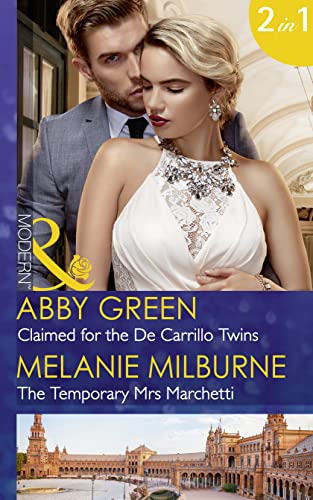 Claimed For The De Carrillo Twins
by Abby Green

Claimed for the De Carrillo Twins

Cruz De Carrillo cannot forget the searing kiss he shared with his shy maid, Trinity Adams. For the moment the Spanish billionaire walked away, horrified at losing his legendary control, Trinity quickly moved on - to become nanny, guardian and step-mother to his brother's sons!

Claimed for the De Carrillo Twins

Cruz De Carrillo cannot forget the searing kiss he shared with his shy maid, Trinity Adams. For the moment the Spanish billionaire walked away, horrified at losing his legendary control, Trinity quickly moved on - to become nanny, guardian and step-mother to his brother's sons!

Now Cruz must protect his orphaned nephews. When Trinity refuses to leave them, he knows there is one solution - a ring on her finger! It's the only way Cruz can keep her in his castillo, under his watchful eye, and finish what he started - this time in his bed!

When Cristiano Marchetti proposes to former mistress Alice Piper, the deal has an expiry date. He has six months to fulfil the conditions of his grandmother's will. But the hotelier has another agenda...exacting revenge on Alice for daring to walk away seven years before!

Alice needs the financial security her enemy is providing but soon their every clash is a shockingly tempting encounter. Yet as she uncovers the man beneath the hard-hearted exterior, the future Mrs Marchetti wonders if she could break the rules of their engagement...and walk down the aisle as more than Cristiano's temporary bride!

Abby Green spent her teens reading Mills & Boon romances. She then spent many years working in the Film and TV industry as an Assistant Director. One day while standing outside an actor's trailer in the rain, she thought: there has to be more than this. So she sent off a partial to Harlequin Mills & Boon. After many rewrites, they accepted her first book and an author was born. She lives in Dublin, Ireland and you can find out more here: www.abby-green.com Melanie Milburne read her first Harlequin at age seventeen in between studying for her final exams. After completing a Masters Degree in Education she decided to write a novel in between settling down to do a PhD. She became so hooked on writing romance the PhD was shelved and soon after she was signed on to the London office of Harlequin Mills and Boon line, becoming the first not previously published Australian author to be contracted for the Presents line in over a decade.

GOR010732800
Claimed For The De Carrillo Twins: Claimed for the De Carrillo Twins (Wedlocked!, Book 84) / The Temporary Mrs Marchetti (Mills & Boon Modern) by Abby Green
Abby Green
Used - Like New
Paperback
HarperCollins Publishers
2017-02-09
384
0263925129
9780263925128
N/A
Book picture is for illustrative purposes only, actual binding, cover or edition may vary.
The book has been read, but looks new. The book cover has no visible wear, and the dust jacket is included if applicable. No missing or damaged pages, no tears, possible very minimal creasing, no underlining or highlighting of text, and no writing in the margins.