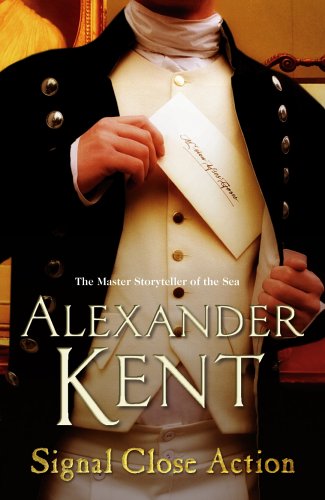 In Stock
$10.69
When in 1798 Richard Bolitho hoists his broad pendant as commodore of a small squadron and prepares to re-enter the Mediterranean he is soon made aware of his responsibility.
Very Good Good
Only 2 left

When in 1798 Richard Bolitho hoists his broad pendant as commodore of a small squadron and prepares to re-enter the Mediterranean he is soon made aware of his responsibility. There are rumours of a massive French armada and of the latest type of artillery - and Bolitho's orders are to seek out the enemy and to discover the intentions of his growing force. Without any British bases in the Mediterranean, and unable to show favour to old friends, Bolitho is well aware that there are others within his ships who are no less dangerous than the enemy - and during the weeks and months in which the squadron faces the hazards of the weather and French broadsides alike, Bolitho knows that far more than his own future is at stake. A fleet, even a nation, could depend on his decisions and, when he places his squadron between the Nile and the power of France, he must accept the price of the challenge.

"Praise for Alexander Kent: 'One of our foremost writers of naval fiction' Sunday Times"
"'Shipwreck, survival ... a spirited battle ... a splendid yarn' The Times"

Alexander Kent is the author of twenty-seven acclaimed books featuring Richard Bolitho. Under his own name, Douglas Reeman, and in the course of a career spanning forty-five years, he has written over thirty novels and two non-fiction books.

GOR001231447
Signal Close Action: (Richard Bolitho: Book 14) by Alexander Kent
Alexander Kent
Richard Bolitho
Used - Very Good
Paperback
Cornerstone
2006-06-01
320
0099497638
9780099497639
N/A
Book picture is for illustrative purposes only, actual binding, cover or edition may vary.
This is a used book - there is no escaping the fact it has been read by someone else and it will show signs of wear and previous use. Overall we expect it to be in very good condition, but if you are not entirely satisfied please get in touch with us.