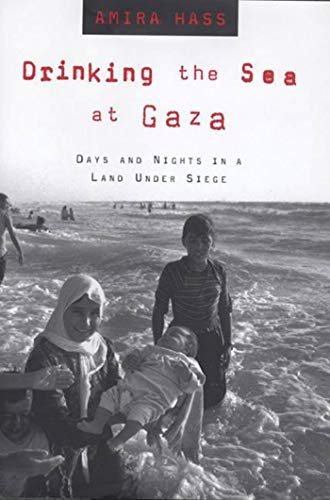 Drinking the Sea at Gaza
by Amira Hass

Used Price
$19.99
Free Shipping in the US
The first Israeli journalist to voluntarily live in Gaza, the much-maligned Palestinian enclave, offers her insights and reflections on what she saw and learned, the joys, and the sudden fears, and gives a moving portrait of the resilient Palestinian people.
Reviews:
Trustpilot
Very Good

Drinking the Sea at Gaza Summary

Drinking the Sea at Gaza: Days and Nights in a Land Under Siege by Amira Hass

In 1993, Amira Hass, a young Israeli reporter, drove to Gaza to cover a story-and stayed, the first journalist to live in the grim Palestinian enclave so feared and despised by most Israelis that, in the local idiom, "Go to Gaza" is another way to say "Go to hell." Now, in a work of calm power and painful clarity, Hass reflects on what she has seen in the Gaza Strips's gutted streets and destitute refugee camps.

Drinking the Sea at Gaza maps the zones of ordinary Palestinian life. From her friends, Hass learns the secrets of slipping across sealed borders and stealing through night streets emptied by curfews. She shares Gaza's early euphoria over the peace process and its subsequent despair as hope gives way to unrelenting hardship. But even as Hass charts the griefs and humiliations of the Palestinians, she offers a remarkable portrait of a people not brutalized but eloquent, spiritually resilient, bleakly funny, and morally courageous.

Full of testimonies and stories, facts and impressions, Drinking the Sea at Gaza makes an urgent claim on our humanity. Beautiful, haunting, and profound, it will stand with the great works of wartime reportage.

Drinking the Sea at Gaza Reviews

"Not only has Amira Hass done the reporting that makes this book a moving and eloquent advocate of Palestinian humanity, but she is also a blunt and beautiful writer" --Amy Wilentz, Newsday

"Hass observes with something like despair, and writes with skill and passion." --Graham Usher, The Economist

Amira Hass was born in Jerusalem in 1957, the daughter of Yugoslavian-Jewish refugees. A journalist for the Hebrew daily Ha'aretz, she covers Gaza and the West Bank. She received the UPI's International Award and the Sokolow Prize, Israel's highest honor for journalists. For her work in Gaza, Hass was been nominated for the Robert F. Kennedy Award

CIN000386247
Drinking the Sea at Gaza: Days and Nights in a Land Under Siege by Amira Hass
Amira Hass
Used - Very Good
Paperback
Henry Holt & Company Inc
2000-06-01
400
0805057404
9780805057409
N/A
Book picture is for illustrative purposes only, actual binding, cover or edition may vary.
This is a used book - there is no escaping the fact it has been read by someone else and it will show signs of wear and previous use. Overall we expect it to be in very good condition, but if you are not entirely satisfied please get in touch with us.