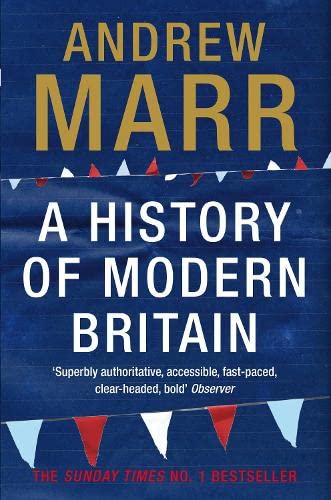 A History of Modern Britain
by Andrew Marr

A History of Modern Britain Summary

A History of Modern Britain by Andrew Marr

A History of Modern Britain by Andrew Marr confronts head-on the victory of shopping over politics. It tells the story of how the great political visions of New Jerusalem or a second Elizabethan Age, rival idealisms, came to be defeated by a culture of consumerism, celebrity and self-gratification. In each decade, political leaders think they know what they are doing, but find themselves confounded. Every time, the British people turn out to be stroppier and harder to herd than predicted.

Throughout, Britain is a country on the edge - first of invasion, then of bankruptcy, then on the vulnerable front line of the Cold War and later in the forefront of the great opening up of capital and migration now reshaping the world. This history follows all the political and economic stories, but deals too with comedy, cars, the war against homosexuals, Sixties anarchists, oil-men and punks, Margaret Thatcher's wonderful good luck, political lies and the true heroes of British theatre.

A History of Modern Britain Reviews

Superb, colourful, outspoken, fresh and richly entertaining. Don't miss. * The Times *
Lively, full of rich anecdotes and sparkling pen portraits. He has the rare gift of being able to explain complex issues in a few crisp sentences. * Sunday Telegraph *

Andrew Marr was born in Glasgow. He has enjoyed a long career in political journalism, including five years as the BBC's Political Editor (2000-05). Andrew's broadcasting includes BBC2's History of Modern Britain series, political documentaries for Channel 4 and BBC Panorama, the BBC1 Andrew Marr Show on Sunday mornings, and Radio 4's Start The Week. He has written several books, including A History of 20th Century Britain and A History of the World. Andrew lives in London with his family.

GOR001222740
A History of Modern Britain by Andrew Marr
Andrew Marr
Used - Very Good
Paperback
Pan Macmillan
2009-03-06
672
0330511475
9780330511476
Short-listed for Galaxy British Book Awards: Play.com Popular Non-Fiction Award 2009 Short-listed for Independent Booksellers' Week Book of the Year Award: Adults' Book of the Year 2008
Book picture is for illustrative purposes only, actual binding, cover or edition may vary.
This is a used book - there is no escaping the fact it has been read by someone else and it will show signs of wear and previous use. Overall we expect it to be in very good condition, but if you are not entirely satisfied please get in touch with us.