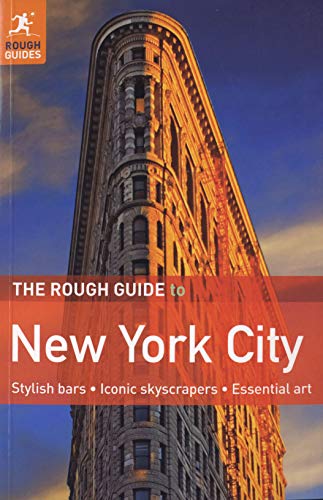 The Rough Guide to New York
by Andrew Rosenberg

Used Price
$8.69
Free Shipping in the US
A guide to New York, the cultural capital of the USA. Taking you from the historic Financial District to the landmark architecture of Midtown and from peaceful Central Park to the furthest reaches of the Bronx, it offers reviews of accommodation and restaurants to suit different budgets.
Reviews:
Trustpilot
Very Good

The Rough Guide to New York by Andrew Rosenberg

The Rough Guide to New York is the definitive guide to the cultural capital of the USA, taking you from the historic Financial District to the landmark architecture of Midtown and from peaceful Central Park to the furthest reaches of the Bronx. It's packed with detailed, lively reviews of accommodation and restaurants to suit all budgets, plus the practical information you'll need to make the best of your break. Get under the skin of this dynamic, vibrant city with the 'things not to miss', essentials on how to get around, and quirkier sections like the recommended New York books and films. With comprehensive research, stunning photographs and dozens of clear, accurate maps The Rough Guide to New York is your essential companion. Make the most of your trip with The Rough Guide to New York.

A serious book for those who really want to get under the skin of the city, it's well written and unflaggingly sparky * The Mail on Sunday *

Stephen Keeling grew up in England and graduated from the University of Oxford in 1992 with a degree in history, then secured a job with The Baltic Observer in Riga, Latvia, as an assistant business editor. In 2007 he wrote the first Rough Guide to Puerto Rico and contributed to Make the Most of Your Time on Earth. Since then, Keeling has updated the Rough Guides to Canada, the Caribbean, Florida, Mexico, New England, New York, Spain, and the United States. He also writes for The Independent, Budget Travel, and other publications.

Andrew Rosenberg is a freelance copy editor and sometimes writer. He lives with his wife, Melanie, his son, Jules, and their cats, Caesar and Louise. He has worked for ESPN the Magazine and was the coauthor of The Rough Guide to New York City. Rosenberg studied English at the University of Virginia.

GOR003978521
The Rough Guide to New York by Andrew Rosenberg
Andrew Rosenberg
Used - Very Good
Paperback
APA Publications
2011-01-20
464
184836590X
9781848365902
N/A
Book picture is for illustrative purposes only, actual binding, cover or edition may vary.
This is a used book - there is no escaping the fact it has been read by someone else and it will show signs of wear and previous use. Overall we expect it to be in very good condition, but if you are not entirely satisfied please get in touch with us.