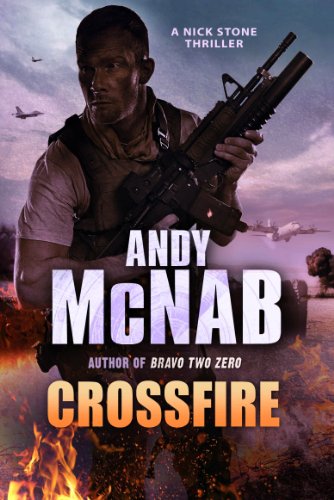 Used Price
$10.39
Free Shipping in the US
Ex-deniable operator Nick Stone is bodyguarding a TV crew on the streets of war-torn Basra. The trail leads from Iraq to London, Dublin, and Kabul - the brutal city where governments, terrorism and big business collide.Caught in the crossfire, Stone's nightmare is only just beginning - for the hunter has suddenly become the hunter...
Reviews:
Trustpilot
Very Good

Ex-deniable operator Nick Stone is bodyguarding a TV crew on the streets of war-torn Basra. He seems certain to die when insurgent gunmen attack. Only a reporter's swift action saves his life. When the reporter vanishes within hours, presumed kidnapped, Stone is asked by the Intelligence Service to find him. The trail leads from Iraq to London, Dublin, and Kabul - the brutal city where governments, terrorism and big business collide. Caught in the crossfire, Stone's nightmare is only just beginning - for the hunter has suddenly become the hunter...

"A heart thumping read" * Daily Express *
"Addictive - packed with wild action and revealing tradecraft" * Daily Telegraph *
"McNab is a terrific novelist - when it comes to thrills he is Forsyth class" * Mail on Sunday *
"McNab's great asset is that the heart of his fiction is non-fiction: other thriller writers do their research, but he has actually been there" * The Sunday Times *

GOR003567885
Crossfire: (Nick Stone Thriller 10) by Andy McNab
Andy McNab
Nick Stone
Used - Very Good
Paperback
Transworld Publishers Ltd
2011-09-01
560
0552163627
9780552163620
N/A
Book picture is for illustrative purposes only, actual binding, cover or edition may vary.
This is a used book - there is no escaping the fact it has been read by someone else and it will show signs of wear and previous use. Overall we expect it to be in very good condition, but if you are not entirely satisfied please get in touch with us.