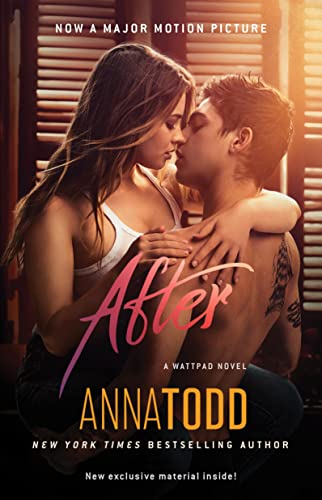 Used Price
$6.69
Free Shipping in the US
Good girl Tessa, just starting out in college, finds herself falling for bad boy Hardin, even though he continues to push her away.
Very Good

Experience the internet's most talked-about book, now a major motion picture, from Anna Todd, the writer Cosmopolitan called "the biggest literary phenomenon of her generation." Now with new exclusive material!

There was the time before Tessa met Hardin, and then there's everything AFTER... Life will never be the same. #Hessa

Tessa is a good girl with a sweet, reliable boyfriend back home. She's got direction, ambition, and a mother who's intent on keeping her that way.

But she's barely moved into her freshman dorm when she runs into Hardin. With his tousled brown hair, cocky British accent, and tattoos, Hardin is cute and different from what she's used to.

But he's also rude--to the point of cruelty, even. For all his attitude, Tessa should hate Hardin. And she does--until she finds herself alone with him in his room. Something about his dark mood grabs her, and when they kiss it ignites within her a passion she's never known before.

He'll call her beautiful, then insist he isn't the one for her and disappear again and again. Despite the reckless way he treats her, Tessa is compelled to dig deeper and find the real Hardin beneath all his lies. He pushes her away again and again, yet every time she pushes back, he only pulls her in deeper.

Tessa already has the perfect boyfriend. So why is she trying so hard to overcome her own hurt pride and Hardin's prejudice about nice girls like her?

Anna Todd manages to make you scream, cry, laugh, fall in love, and sit in the fetal position... Whether you have read the Wattpad version or not, After is a can't miss book - but get ready to feel emotions that you weren't sure that a book could bring out of you.--Fangirlish
The one thing you can count on is to expect the unexpected.--Vilma's Book Blog

Anna Todd is the New York Times bestselling author of the After series of books, The Spring Girls, and the recent The Brightest Stars. After has been released in over thirty-five languages and is a #1 international bestseller. She has since written eight additional novels and serves as a producer and screenwriter on the upcoming film adaptation of After We Collided, the sequel to After. A native of Ohio, Anna lives with her husband and son in Los Angeles. Find her at AnnaTodd.com, on Twitter and Instagram at @AnnaTodd, and on Wattpad as Imaginator1D.

CIN000276039
After by Anna Todd
Anna Todd
The After Series
Used - Very Good
Paperback
Simon & Schuster
2019-04-01
608
1982111003
9781982111007
N/A
Book picture is for illustrative purposes only, actual binding, cover or edition may vary.
This is a used book - there is no escaping the fact it has been read by someone else and it will show signs of wear and previous use. Overall we expect it to be in very good condition, but if you are not entirely satisfied please get in touch with us.