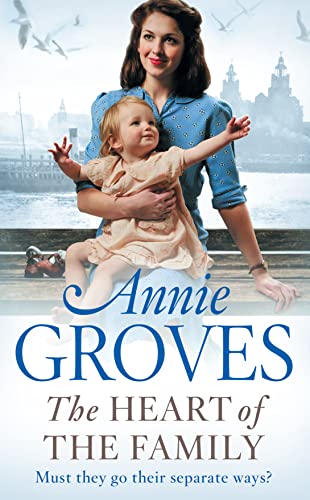 The Heart of the Family
by Annie Groves

The much-loved author of ACROSS THE MERSEY tells of Liverpool under bombardment as never before - but the Campion family refuses to give in.

The Heart of the Family Summary

The Heart of the Family by Annie Groves

The much-loved author of ACROSS THE MERSEY tells of Liverpool under bombardment as never before - but the Campion family refuses to give in.

The Campions have always stuck together through danger and sorrow, but even they begin to wonder if it's time to take their youngest, the twins, to safety away from the bombing raids. The twins have other worries on their minds; having been inseparable, they now realise that they each have different ambitions - and Lou isn't sure she'll find what she wants close to home.

Meanwhile, cousin Bella is managing a creche and discovers that life isn't all about pleasure. She's the last person her family would expect to help anyone; but when a figure from the past turns up on the doorstep, Bella's unexpected reserves of compassion are revealed.

From hardship and heartbreak, surviving the toughest of times, the Campions know they can make it through if they have one another.

The Heart of the Family Reviews

`A stirring and heartrending family saga...the choices and dreams of a generation of women combine to create this passionate story.' Liverpool Daily Post

`Written from the heart.' My Weekly

`Shows how courage, love and devotion can shine out even in the darkest times' Northern Echo

GOR001236822
The Heart of the Family by Annie Groves
Annie Groves
Used - Very Good
Paperback
HarperCollins Publishers
2009-08-06
480
0007265905
9780007265909
N/A
Book picture is for illustrative purposes only, actual binding, cover or edition may vary.
This is a used book - there is no escaping the fact it has been read by someone else and it will show signs of wear and previous use. Overall we expect it to be in very good condition, but if you are not entirely satisfied please get in touch with us.