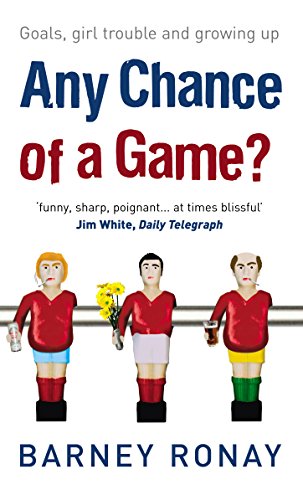 Any Chance Of A Game?
by Barney Ronay

In Stock
$11,39
Fast approaching 30, Barney Ronay is a Sunday League left back with some tough choices to make. Would he be better off back with his best mate Dan in the bachelor pad of pizza boxes, lager and Playstation into the early hours?
Very Good Good
Only 2 left

Any Chance Of A Game? Summary

Any Chance Of A Game? by Barney Ronay

Fast approaching 30, Barney Ronay is a Sunday League left back with some tough choices to make. Is staying in with his girlfriend and Gardeners' World on a Friday night doing much for his match fitness? Would he be better off back with his best mate Dan in the bachelor pad of pizza boxes, lager and Playstation into the early hours? And at their age can they still afford to spend weekends in their desperate struggle to keep Bolingbroke Athletic afloat? Shouldn't they be growing up, getting married, spending their Sundays at Homebase? This is the hilarious story of a team in early mid-life crisis, hiding from responsibility in the strange masochism at the ugly end of the beautiful game - the smell of Deep Heat, naked fat men, hangovers and the eternal belief that next week you might just rediscover your first touch.

Any Chance Of A Game? Reviews

"A tale anyone who has ever played football can relate to, a tale any number of people could have written. But I'm glad it was Barney Ronay who actually did it. His version is funny, sharp, poignant, his ear for conversation acute. And his prose is at times blissful, filling his book with observations that lift it way above being just an accumulation of park football yarns... he makes you care for a bunch of footballing saddos, root for them, really hope they manage to pull it off" * Telegraph *
"Resounds with matey banter. His descriptions of the actual games are hilarious, and his book has more insight into the pleasures, pain and the point of football than the combined autobiographies of an entire premiership squad" * Independent on Sunday *
"Hilarious ... affectionately captures the rites of passage of your average footy-mad guy" * Metro *
"If Barney Ronay played football as well as he writes about it nobody would have heard of David Beckham" -- Harry Pearson

Barney Ronay lives in London and writes about sport for The Guardian and When Saturday Comes. He is co-editor of the Half Decent Football Book and creator of the mildly successful satirical sporting website The Pitch. He plays right midfield.

GOR001243665
Any Chance Of A Game? by Barney Ronay
Barney Ronay
Used - Very Good
Paperback
Ebury Publishing
2006-07-06
320
0091908787
9780091908782
N/A
Book picture is for illustrative purposes only, actual binding, cover or edition may vary.
This is a used book - there is no escaping the fact it has been read by someone else and it will show signs of wear and previous use. Overall we expect it to be in very good condition, but if you are not entirely satisfied please get in touch with us.