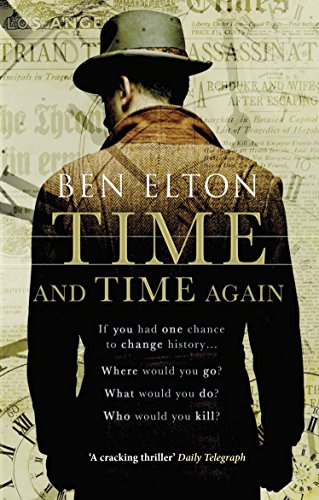 Used Price
$6.69
Free Shipping in the US
It's the 1st of June 1914 and Hugh Stanton, ex-soldier and celebrated adventurer is quite literally the loneliest man on earth. A war that will begin with a single bullet. But can a single bullet truly corrupt an entire century?
Reviews:
Trustpilot
Very Good Good

It's the 1st of June 1914 and Hugh Stanton, ex-soldier and celebrated adventurer is quite literally the loneliest man on earth. No one he has ever known or loved has been born yet. Perhaps now they never will be. Stanton knows that a great and terrible war is coming. A collective suicidal madness that will destroy European civilization and bring misery to millions in the century to come. He knows this because, for him, that century is already history. Somehow he must change that history. He must prevent the war. A war that will begin with a single bullet. But can a single bullet truly corrupt an entire century? And, if so, could another single bullet save it?

"A cracking thriller" * Daily Telegraph *
"Time and Time Again triumphs and it's the best I've read of Elton's many bestsellers" * The Times *
"A gripping, unpredictable read" * Sunday Mirror *

Ben Elton's multi-award winning career as both performer and writer encompasses some of the most memorable and incisive comedy of the past thirty-five years. In addition to his hugely influential work as a stand-up comic, he was co-writer of TV hits The Young Ones and Blackadder and sole creator of The Thin Blue Line and Upstart Crow. He has written fifteen major bestsellers, including Stark, Popcorn, Inconceivable, Dead Famous, High Society, Two Brothers and Time and Time Again, three West End plays and three musicals, including global phenomenon We Will Rock You. He has written and directed two feature films, Maybe Baby and Three Summers. He is married and has three children.