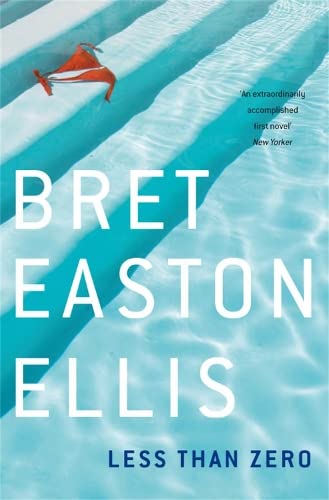 In Stock
$10.99
A raw portrait of a lost, rich generation who experience sex, drugs, and disaffection at too early an age
Very Good Good
6 in stock

Clay comes home to L.A. for Christmas vacation and re-enters a landscape of limitless privilege and moral entropy, where everyone drives Porsches, dines at Spago, and snorts mountains of cocaine. He tries to renew feelings for his girlfriend, Blair, and for his best friend from high school, Julian, who is careering into hustling and heroin. Clay's holiday turns into a dizzying spiral of desperation that takes him through the relentless parties in glitzy mansions, seedy bars, and underground rock clubs. Morally barren, ethically bereft and tinged with implicit violence, Less Than Zero is a shocking coming-of-age novel about the casual nihilism that comes with youth and money.

`One of the most disturbing novels I've read in a long time. It possesses an unnerving air of documentary reality' Michiko Kakutani, New York Times

`The Catcher in the Rye for the MTV generation' USA Today

Bret Easton Ellis is the author of six novels, Less Than Zero, The Rules of Attraction, American Psycho, Glamorama, Lunar Park and most recently Imperial Bedrooms, which was a Sunday Times Top Ten Bestseller, and a collection of stories, The Informers. His work has been translated into twenty-seven languages. He lives in Los Angeles.

GOR001222483
Less Than Zero by Bret Easton Ellis
Bret Easton Ellis
Used - Very Good
Paperback
Pan Macmillan
2006-11-03
208
0330447971
9780330447973
N/A
Book picture is for illustrative purposes only, actual binding, cover or edition may vary.
This is a used book - there is no escaping the fact it has been read by someone else and it will show signs of wear and previous use. Overall we expect it to be in very good condition, but if you are not entirely satisfied please get in touch with us.