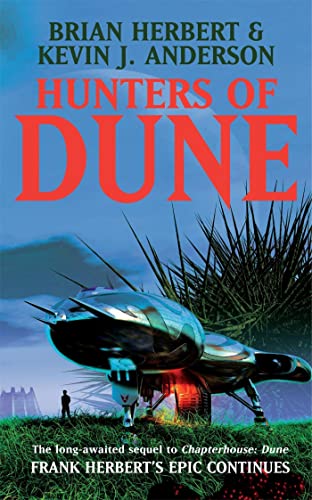 Hunters of Dune
by Brian Herbert

Hunters of Dune by Brian Herbert

Fleeing from the monstrous Honored Matres - dark counterparts of the Bene Gesserit Sisterhood - Duncan Idaho, the military genius Bashar Miles Teg, a woman named Sheeana who can talk to sandworms, and a group of desperate refugees explore the boundaries of the universe.
Aboard their sophisticated no-ship, they have used long-stored cells to resurrect heroes and villains from the past, including Paul Muad'Dib, in preparation for a final confrontation with a mysterious outside Enemy so great it can destroy even the terrible Honored Matres.
And, deep in the hold of their giant ship, the refugees carry the last surviving sandworms from devastated Arrakis, as they search the universe for a new Dune.

'Frank Herbert would surely be delighted and proud of this continuation of his vision.' Dean Koontz

Frank Herbert would surely be delighted and proud of this continuation of his vision. * Dean Koontz *
Those who long to return to the world of desert, spice and sandworms will be amply satisfied * The Times *
Unique among SF novels . . . I know nothing comparable to it except The Lord of the Rings. * Arthur C. Clarke on DUNE *
They lay the foundation of the Dune saga . . . A terrific read in its own right . . . Will inspire readers to turn, or return, to its great predecessor. * Publishers Weekly *
A triumphant climax to the history of the Dune universe. * The Bookseller on THE BATTLE OF CORRIN *

Brian Herbert is a widely-published science fiction novelist. Kevin J. Anderson's novels include bestsellers based on the universes of Star Wars and The X Files. Together they created PRELUDE TO DUNE, LEGENDS OF DUNE and THE ROAD TO DUNE, all bestsellers set in the universe created by Brian's father, Frank Herbert.Visit the official DUNE website: http://www.dunenovels.com/Follow Kevin J Anderson on Twitter: https://twitter.com//TheKJAVisit Kevin J. Anderson's website: www.wordfire.com Kevin J. Anderson has over 16 million books in print, in 29 languages worldwide. He is the author of The Saga of Seven Suns, numerous X-Files and Star Wars novels, and the co-author of the bestselling Dune prequels and sequels. He lives in Colorado with his wife, author Rebecca Moesta.

GOR001237891
Hunters of Dune by Brian Herbert
Brian Herbert
Used - Very Good
Paperback
Hodder & Stoughton General Division
2007-03-08
640
0340837497
9780340837498
N/A
Book picture is for illustrative purposes only, actual binding, cover or edition may vary.
This is a used book - there is no escaping the fact it has been read by someone else and it will show signs of wear and previous use. Overall we expect it to be in very good condition, but if you are not entirely satisfied please get in touch with us.