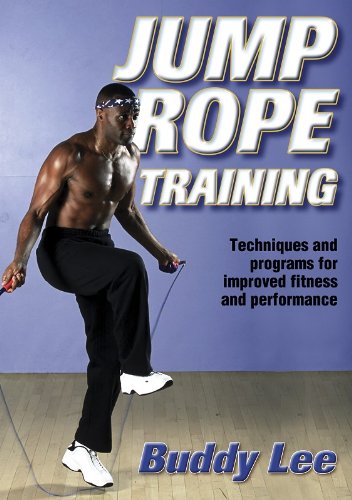 Used Price
$10,99
Free Shipping in the US
With specific chapters on building aerobic endurance and anaerobic power, this book includes skipping programmes for fitness and sports conditioning. A variety of jump techniques are demonstrated, with routines designed to develop speed, agility, co-ordination, balance and stamina.
Reviews:
Trustpilot
Very Good


Jump rope training expert, former Marine, and Olympic wrestler Buddy Lee was the official jump rope conditioning consultant to 25 U.S. Olympic teams from 1996 to 2000. In Jump Rope Training he shows you how to incorporate winning techniques in a portable, high-level workout program.

With Jump Rope Training, you'll learn how to use one simple tool to improve speed, agility, balance, strength, power, and endurance. Lee provides clear instruction on a wide range of jumping techniques along with photos and illustrations to show you how they're done.

Just 5 to 10 minutes of jumping rope provides superior conditioning for fitness or sports--a completely portable, high-level system for anyone looking to supplement training or stay fit. Get Jump Rope Training to improve both fitness and performance from one training source.

"
"""Buddy Lee's rope and training program has helped me to be quicker and more explosive. Thanks for teaching me how to stay in tip-top shape. Now I am training better than ever!"""
Kurt Angle
Olympic gold medalist, freestyle wrestling

"""If you want to improve your speed, quickness, and overall performance, Buddy Lee's system is simply the best. The difference will change the way you train! He is the wizard of the rope!"""
Nancy Lieberman
Basketball Hall of Fame member, ESPN analyst

"""Buddy Lee's jump rope system has helped me stay in shape, focused, and helped me to recover from all types of injuries. His ropes are by far the best on the market."""
Rulon Gardner
Olympic Gold Medallist, Greco Roman style wrestling
"


Buddy Lee, president and founder of Jump Rope Technology, Inc., has fashioned a worldwide reputation with his incredible jump rope skills. He has performed in exhibitions for sports events, presidents, and world leaders in 24 countries.

Lee used rope jumping as a key part of his wrestling training to develop into a world-class and Olympic athlete. He was a 1992 Olympian in Greco-Roman wrestling and a 20-time U.S. national and Armed Forces champion in three different styles of wrestling. After earning a degree in secondary education from Old Dominion University, where he was a two-time All-American wrestler, he served 11 years in the U.S. Marine Corps, where he became a three-time national champion, a three-time World Military champion, and a three-time World Cup and Pan Am medalist. He also was voted outstanding wrestler in the 1992 national wresting championships and was Marine Athlete of the Year twice.

He served as the jump rope conditioning consultant to the U.S. Olympic Committee from 1996 to 2000, training 25 Olympic teams and many gold medalists. Today he consults with the U.S. Professional Tennis Association, the U.S. Figure Skating Association, and several other organizations. Buddy is the co-inventor of the Hyperformance swivel bearing ropes, designed to produce speeds of up to six revolutions per second and eliminate drag and friction present in other ropes. Buddy is also an international motivational speaker and author of rope jumping for several national sport magazines. He travels the country, training athletes and fitness enthusiasts with his jump rope system. Buddy resides in Woodbridge, Virginia.

Get a jump on training; master jump rope skills; use proven rope training methods; train and compete to the max; build an aerobic base for endurance; establish anaerobic power; gain speed and quickness; develop agility, coordination, and balance; boost strength and power; condition for specific sports and fitness goals.

GOR001859656
Jump Rope Training by Buddy Lee
Buddy Lee
Used - Very Good
Paperback
Human Kinetics Publishers
2003-04-30
176
0736041516
9780736041515
N/A
Book picture is for illustrative purposes only, actual binding, cover or edition may vary.
This is a used book - there is no escaping the fact it has been read by someone else and it will show signs of wear and previous use. Overall we expect it to be in very good condition, but if you are not entirely satisfied please get in touch with us.