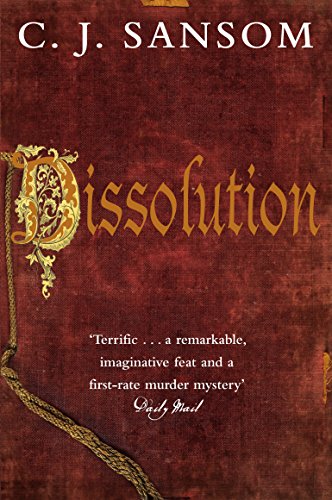 In Stock
$6.99
The first book in the lauded, bestselling Shardlake series
Like New Very Good Good
Only 2 left

Dissolution is the first in the phenomenal Shardlake series by bestselling author, C. J. Sansom.

It is 1537, a time of revolution that sees the greatest changes in England since 1066. Henry VIII has proclaimed himself Supreme Head of the Church and the country is waking up to savage new laws, rigged trials and the greatest network of informers ever seen. Under the order of Thomas Cromwell, a team of commissioners is sent through the country to investigate the monasteries. There can only be one outcome: the monasteries are to be dissolved.

But on the Sussex coast, at the monastery of Scarnsea, events have spiralled out of control. Cromwell's Commissioner Robin Singleton, has been found dead, his head severed from his body. His horrific murder is accompanied by equally sinister acts of sacrilege - a black cockerel sacrificed on the altar, and the disappearance of Scarnsea's Great Relic.

Dr Matthew Shardlake, lawyer and long-time supporter of Reform, has been sent by Cromwell to investigate. But Shardlake's investigation soon forces him to question everything he hears, and everything that he intrinsically believes . . .

"This is a humdinger of a whodunnit. Read it!"
The sights, the voices, the very smell of this turbulent age seem to rise from the page. With his remarkable debut, C. J. Sansom can lay claim to a place among the most distinguished of modern historical novelists. (P. D. James) Sansom seems to have been born with, or instinctively acquired, that precious balance of creativity and research that lets a mystery set in another time walk a delicate line between history and humanity. ("Chicago Tribune") With this cunningly plotted and darkly atmospheric effort, Sansom proves himself to be a promising newcomer. ("Publishers Weekly") This is a humdinger of a whodunnit. Read it! (Colin Dexter)

GOR008628824
Dissolution by C. J. Sansom
C. J. Sansom
The Shardlake series
Used - Like New
Paperback
Pan Macmillan
2007-05-18
480
0330450794
9780330450799
Short-listed for CWA New Blood Dagger 2003 (UK) Short-listed for CWA Historical Dagger 2003 (UK) Short-listed for Waverton Good Read Award 2003 (UK)
Book picture is for illustrative purposes only, actual binding, cover or edition may vary.
This is a used book - there is no escaping the fact it has been read by someone else and it will show signs of wear and previous use. Overall we expect it to be in very good condition, but if you are not entirely satisfied please get in touch with us.