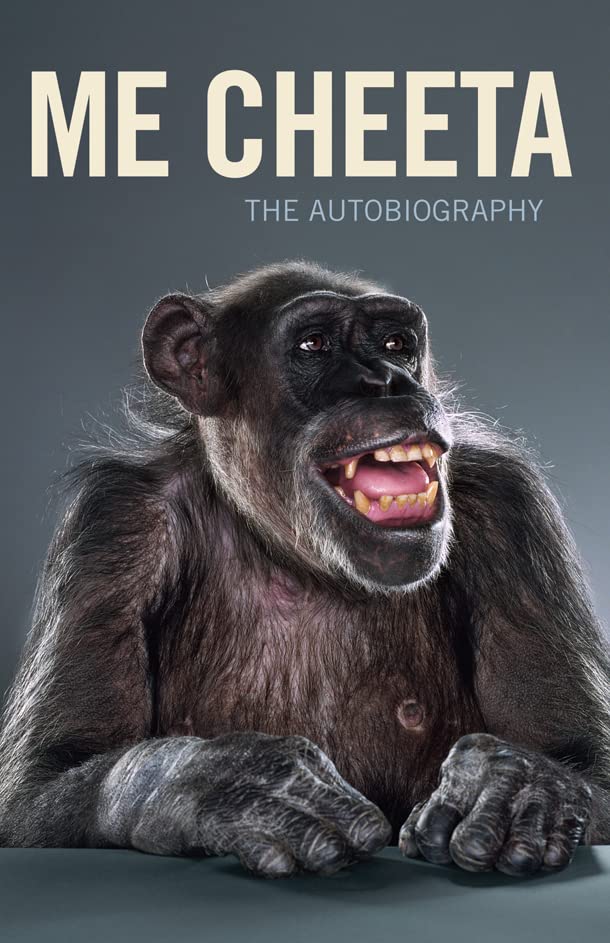 Me Cheeta
by Cheeta

Me Cheeta: The Autobiography by Cheeta

The greatest Hollywood Tarzan, Johnny Weissmuller, died in 1984. His coffin was lowered into the ground to the recorded sounds of his famous jungle call. Maureen O'Sullivan, his Jane, died in 1998. Weissmuller's son, who first played Boy in the 1939 film Tarzan finds a Mate, has gone too. But Cheeta the Chimp, who starred with them all, is alive and well, retired in Palm Springs. At the incredible age of seventy-five, he is by far the oldest living chimpanzee ever recorded.

Now, in his own words, Cheeta (aka Jiggs) finally tells his extraordinary story.

He was just a baby when snatched from the jungle of Liberia in 1932, by the great animal importer Henry Trefflich, who went on to supply NASA with its 'Monkeys for Space' programme. That same year, Cheeta appeared in Tarzan the Ape Man, and in 1934 Tarzan and His Mate, in which he famously stole the clothes from a naked O'Sullivan, dripping wet from an underwater swimming scene with Weissmuller. Other Tarzan films followed until Cheeta finally retired from the big screen after the 1967 film Doctor Dolittle with Rex Harrison, whose finger he accidentally bit backstage while being offered a placatory banana.

Cheeta tells it all, a life lived with the stars, a monkey stolen from deepest Africa forced to make a living in the fake jungles of Hollywood. He tells us too of his journey beyond the screen: his struggle with drink and addiction to cigars; his breakthrough with a radical new form of abstract painting, 'Apeism'; his touching relationship with his retired nightclub-performing grandson Jeeta, now a considerable artist in his own right; his fondness for hamburgers and his battle in later life with diabetes; and, through thick and thin, carer Dan Westfall, his loving companion who has helped this magnificent monkey come to terms with his peculiar past.

Funny, moving, searingly honest, Cheeta transports us back to a lost Hollywood. He is a real star, and this the greatest celebrity memoir of recent times.

'I challenge anyone to find a more salacious, foul-mouthed and entertaining memoir.' Richard Grant, Telegraph Magazine

'It is honestly hard to know where to start . . . A hilarious book, packed with well-aimed Swiftian turds . . . It will subtly change for ever the way we think not only about Hollywood (and actor's memoirs) but also about our own very species.' Lynne Truss, Sunday Times

'Me Cheeta may well be the finest Hollywood memoir ever written . . . As a raconteur of the excesses of Hollywood, Cheeta is right up there with the likes of David Niven. Like all the best comedy, it is never far from poetry.' Craig Brown, Mail on Sunday

'The bitchiest, most scurrilous chronicle of the Dream Factory since Kenneth Anger brought out Hollywood Babylon. Laugh-out-loud hilarious . . . also a moving tribute to the man who will forever be associated with the role of Tarzan. Cheeta's last encounter with Weissmuller is so sad I burst into tears.' Anne Bilson, Sunday Telegraph

'The most rollicking showbiz memoir since David Niven's Bring on the Empty Horses . . . Me Cheeta is a satirical masterpiece.' Roger Lewis, Telegraph

'The literary equivalent of Cheeta's own "triple-back-flip-handclap-double-lip-flip-and-grin"... all of this delivered in glorious inventive prose. Whoever you are, I salute you!' Stuart Kelly, Scotland on Sunday

'A lovely way to look at the history of Hollywood, and probably more truthful than most accounts... It will make it very difficult to read other books in the same genre for some time.' Philip Hensher, Spectator

`Me Cheeta should be greeted with hoots of approval.' Michael Brunton, TIME

`The ghostwriter is inspired. A genius, even.' Veronica Howell, Guardian

`Cheeta the chimpanzee delivers the memoirs of Hollywood's Golden Age that no mere human would ever dare to write. Scurrilous and litigious, by turns laugh out loud funny and painful.' Sunday Express

Cheeta was just a baby when snatched from the Liberian jungle in 1932, by the great animal importer Henry Trefflich, who went on to supply NASA with its 'Monkeys for Space' programme. James Lever was born in Bolton and educated in Oxford. He's 38, and spent his twenties writing an 800-page novel called `News Sport Weather', whose subject was 'everything'. It wasn't any good, and nor was it published. He lives in London, where he has worked as a comedy-writer and performer, reviewer, ghost and editor. `Me Cheeta' is his first novel.

GOR001221387
Me Cheeta: The Autobiography by Cheeta
Cheeta
Used - Very Good
Hardback
HarperCollins Publishers
2008-10-01
336
0007278632
9780007278633
N/A
Book picture is for illustrative purposes only, actual binding, cover or edition may vary.
This is a used book - there is no escaping the fact it has been read by someone else and it will show signs of wear and previous use. Overall we expect it to be in very good condition, but if you are not entirely satisfied please get in touch with us.