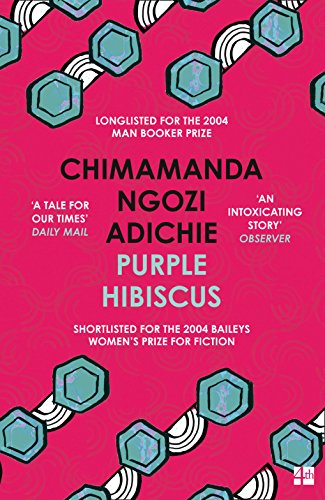 The limits of fifteen-year-old Kambili's world are defined by the high walls of her family estate and the dictates of her fanatically religious father. Her life is regulated by schedules: prayer, sleep, study, prayer.

The limits of fifteen-year-old Kambili's world are defined by the high walls of her family estate and the dictates of her fanatically religious father. Her life is regulated by schedules: prayer, sleep, study, prayer.

When Nigeria is shaken by a military coup, Kambili's father, involved mysteriously in the political crisis, sends her to live with her aunt. In this house, noisy and full of laughter, she discovers life and love - and a terrible, bruising secret deep within her family.

This extraordinary debut novel from Chimamanda Ngozi Adichie, author of 'Half of a Yellow Sun', is about the blurred lines between the old gods and the new, childhood and adulthood, love and hatred - the grey spaces in which truths are revealed and real life is lived.

'An intoxicating story that is at once distinctly feminine, African and universal.' Observer

'There's a quiet confidence about the writing which is very attractive - it isn't showy, it isn't brash, but on the contrary both captivating and mature.' Margaret Forster

'A sensitive and touching story of a child exposed too early to religious intolerance and the uglier side of the Nigerian state.' J. M. Coetzee

'A beautifully judged account of the private intimate stirrings of a young girl...Adichie is a fresh new voice out of Africa.' Telegraph

'Political brutality and domestic violence, religion and witchcraft all merge with subtle force in this memorable novel. Chimamanda Ngozi Adichie uses childhood innocence to write Nigerian history with the eye of a family insider.' Hugo Hamilton

'One of the finest debut novels of recent years...as punchy and characterful as Monica Ali's "Brick Lane".' Evening Standard

'Assured and evocative...a tale for our times.' Daily Mail

'Grips the reader from start to finish. I could not put it down.' Irish Times

GOR008676948
Purple Hibiscus by Chimamanda Ngozi Adichie
Chimamanda Ngozi Adichie
Used - Like New
Paperback
HarperCollins Publishers
2005-01-27
336
0007189885
9780007189885
N/A
Book picture is for illustrative purposes only, actual binding, cover or edition may vary.
The book has been read, but looks new. The book cover has no visible wear, and the dust jacket is included if applicable. No missing or damaged pages, no tears, possible very minimal creasing, no underlining or highlighting of text, and no writing in the margins.