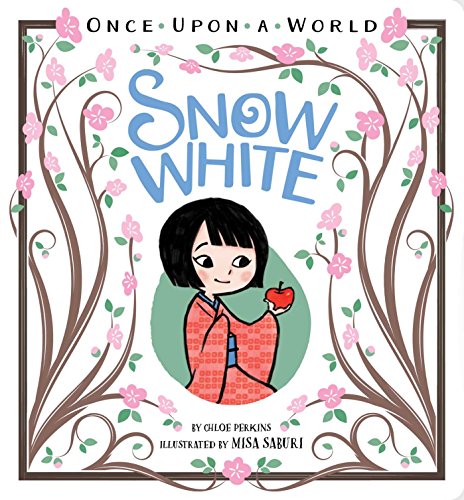 Used Price
$10.99
Free Shipping in the US
"This is the enchanting tale of Snow White, the princess who is cast out of her castle and who takes a bite of a ruby-red apple. But set in Japan"--Back cover.
Reviews:
Trustpilot
Like New Very Good

The classic story of Snow White gets a fresh twist in this vibrant Japanese spin on the beloved fairy tale!

Once upon a time, there was a princess called Snow White. She lived in a magnificent castle with her stepmother, a beautiful but wicked queen...

The classic tale of Snow White gets a fresh twist in this debut title of a brand-new board book series, Once Upon a World. With Japan as the backdrop, and beautiful artwork from Japanese illustrator Misa Saburi, Snow White is still the same girl who meets seven dwarves and accepts a shiny red apple-but she's totally reimagined. Once Upon a World offers a multicultural take on the fairy tales we all know and love. Because these tales are for everyone, everywhere.

Chloe Perkins is the editor and author of a few dozen books for children. She lives in New York City, with her husband, Rico, and their corgi puppy/sometimes shark, Marius. Growing up in a small town in Ohio, Chloe always dreamed of writing stories that could take kids on their own reading adventures, and she's thrilled to be doing just that!

GOR010808023
Snow White by Chloe Perkins
Chloe Perkins
Once Upon a World
Used - Like New
Hardback
Simon & Schuster
2016-11-01
24
1481471856
9781481471855
N/A
Book picture is for illustrative purposes only, actual binding, cover or edition may vary.
The book has been read, but looks new. The book cover has no visible wear, and the dust jacket is included if applicable. No missing or damaged pages, no tears, possible very minimal creasing, no underlining or highlighting of text, and no writing in the margins.