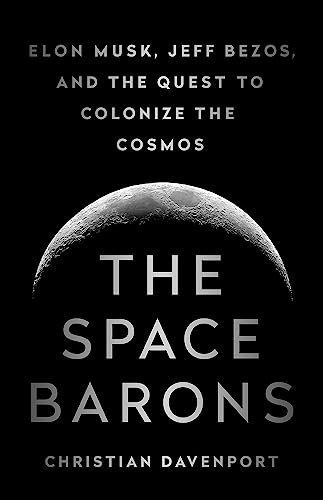 The Space Barons
by Christian Davenport

Used Price
$15.49
Free Shipping in the US
The visionary quest to rekindle the human exploration and colonization of space led by two rivals and their vast fortunes, egos, concern about the future of humanity, and visions of space as the next entrepreneurial frontier
Very Good

The Space Barons: Elon Musk, Jeff Bezos, and the Quest to Colonize the Cosmos by Christian Davenport

The visionary quest to rekindle the human exploration and colonization of space led by two rivals and their vast fortunes, egos, concern about the future of humanity, and visions of space as the next entrepreneurial frontier

For years, space enthusiasts have imagined people in spaceships colonizing the cosmos, and for more than four decades, US presidents have been predicting a real-life journey to Mars. Little progress, however, has been made since the halcyon days of the Mercury and Apollo programs--until now. Chris Davenport tells the story of the "Space Barons"--notably Elon Musk and Jeff Bezos, but also Richard Branson and Paul Allen--and their unbelievably big ambitions to revive the US manned space program and reignite ancient dreams.

These tycoons, with deep imaginations and deeper wallets, have ambitions to go far into space, well beyond the lower Earth orbit of the International Space Station. They are the founders of some of the biggest brands in the world--Amazon, Tesla, PayPal, Microsoft, Virgin--and have poured hundreds of millions of their own money into their new companies, betting that space tourism, asteroid mining, CubeSats (satellites the size of shoe boxes), and other new ventures will prove to be the next great technological revolution. For them, this is about more than monetizing space and space travel; it's exploration for exploration's sake: striking out with one destination in mind, but finding something else entirely. "Do we want," Elon Musk asks, "a future where we are forever confined to one planet until some eventual extinction event--however far in the future that might occur? Or do we want to become a multi-planet species, ultimately out there among the stars?"

With an inside track on the businesses, rivalries, and rocketry that are fueling the new space race, The Space Barons is the story of how these billionaires plan to open the space frontier, extending humanity's reach and fulfilling the dreams of a generation.

"Christian Davenport has written a terrific book on the new space entrepreneurs."--Newt Gingrich
"Entertaining, skillfully narrated book"--The Week
"Highly accessible... Davenport's access to key players, from the companies' founders to its employees, lends authority to his account."--Scientific Inquirer
"Important and revealing"--The Weekly Standard
"In The Space Barons: Elon Musk, Jeff Bezos, and the Quest to Colonize the Cosmos, Christian Davenport tells the backstories of the billionaires who are vying for control of the emerging NewSpace industry."--The New Yorker
"In prose more than worthy of a staff writer at the Washington Post, Davenport glides effortlessly between biographical vignettes, engineering and financial challenges in building spacecraft, government obstacles to private space exploration, project failures and triumphs, and rivalry as 'the best rocket fuel.'"--Seeking Alpha
"The Space Barons is fastidious and engrossing"--The Spectator
"Topping my reading list for space fans this summer is The Space Barons: Elon Musk, Jeff Bezos, and the Quest to Colonize the Cosmos, Christian Davenport's fine new book on competition in the New Space world."--Forbes.com
"The Space Barons by Christian Davenport, a Washington Post reporter, is an exciting narrative filled with colorful reporting and sharp insights. The book sparkles because of Davenport's access to the main players and his talent for crisp storytelling."--Walter Isaacson, New York Times Book Review
"In The Space Barons, Davenport lays out a compelling narrative of how Musk (SpaceX, Tesla), Jeff Bezos (Blue Origin, Amazon), Richard Branson (Virgin) and Paul Allen (Microsoft) all dreamed at an early age of the prospects of commercial space travel...Through compelling storytelling... [and] impressive research and extensive interviews."--Winnipeg Free Press
"The Space Barons is a pacy, smartly reported book on the new generation of entrepreneurs who are transforming the business of space... [The] book fizzes with some wonderful human stories of imagination and endeavor but also provides a broad sweep of the current state of the space industry."--Financial Times
"Davenport displays his reporting and storytelling skills. His writing is tight and, suitably for the subject matter, propulsive. He fleshes out the main protagonists with fine character vignettes."--The Washington Post
"Strap in, you dreamers of space travel, you lovers of invention, you admirers of the unquenchable thirst for exploration, for here is a book that will thrill you to your core... It's a wonderful story, a thrilling adventure of literal and metaphoric highs and lows, based on interviews with the billionaires but encompassing a much broader range of reporting... A big story, told through its vividly evoked small details."--Booklist
"Starting with a blank canvas, Christian Davenport has painted a comprehensive portrait of some of the most influential leaders in commercial space, and indeed of the industry itself. Well-researched and entertaining, The Space Barons gives both a rich texture to the beginnings and a tantalizing outline of the future of commercial human space travel."--Michael Lopez-Alegria, former NASA astronaut, past president of the Commercial Space Flight Federation, and principal, MLA Space, LLC
"Readers will thrill at this lucid, detailed, and admiring account of wealthy space buffs who are spending their own money, making headlines, producing genuine technical advances, and resurrecting the yearning to explore the cosmos."--Kirkus, Starred Review
"A must-read. A compelling account of how today's self-made tycoons are driven to change our world and our relationship with outer space. This is distinctly an American story, nowhere but America could these Space Barons rise, thrive, and succeed. Follow their journey into the future."--Dr. Mark Albrecht, executive secretary of the National Space Council under President George H. W. Bush and author of Falling Back to Earth: A First Hand Account of the Great Space Race and the End of the Cold War
"Unlike the space race of the 1950s and 1960s, the new space race is not a competition between superpowers-it is a competition among billionaires with egos and ambitions that match their fortunes. The Space Barons provides a superb behind-the-scenes look that chronicles the new space race from its beginning some two decades ago to the headlines of today. This book is a must-read for everyone who fell in love with space as a kid and still longs to reach for the heavens."--Todd Harrison, Center for Strategic and International Studies

Christian Davenport is a staff writer at theWashington Post covering the space and defense industries for the financial desk. He joined the Post in 2000, and has written about the DC-area sniper shootings, the Abu Ghraib prison scandal, and the burial problems at Arlington National Cemetery. He is a recipient of the Peabody award for his work on veterans with Traumatic Brain Injury and has been on reporting teams that were finalists for the Pulitzer Prize three times.

Before joining the financial staff, Davenport was an editor on the Metro desk, overseeing coverage of local government and politics. He has also worked at Newsday, Philadelphia Inquirer, and Austin American-Statesman. As a frequent radio and television commentator, he has appeared on MSNBC, CNN, PBS NewsHour, and several NPR shows, including All Things Considered and Diane Rehm.

GOR009369648
The Space Barons: Elon Musk, Jeff Bezos, and the Quest to Colonize the Cosmos by Christian Davenport
Christian Davenport
Used - Very Good
Hardback
INGRAM PUBLISHER SERVICES US
2018-03-20
320
1610398297
9781610398299
N/A
Book picture is for illustrative purposes only, actual binding, cover or edition may vary.
This is a used book - there is no escaping the fact it has been read by someone else and it will show signs of wear and previous use. Overall we expect it to be in very good condition, but if you are not entirely satisfied please get in touch with us.