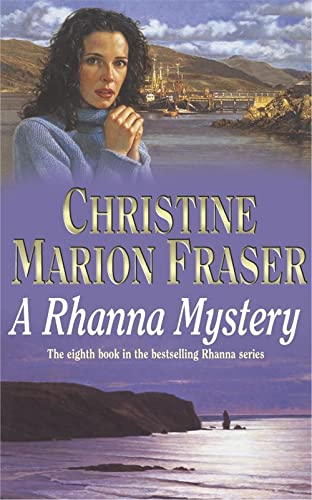 In Stock
$23.99
The eighth novel in the bestselling RHANNA series
Very Good Good
6 in stock

It is 1968, and after twenty years of marriage, farmer Fergus McKenzie and his beloved Kirsteen are about to be parted for the first time as Kirsteen sets off for Glasgow to help nurse a friend's mother. Fergus knows he'll miss her more than anything, but with his friends and family around him, and his faithful Border collie Heinz at his side, he reckons he can survive. But when a visitor appears dramatically at the farmhouse in the shape of a beautiful young woman, routine turns into chaos and gives rise to avid speculation throughout the close-knit community. They are all fascinated by the mystery guest - none more so than Fergus, whose emotions are thrown into turmoil as he is forced choose between loyalty to Kirsteen and the tempting attractions of youth, while his passions are played out under the watchful eyes of the islanders.

A good storyline, believable characters and above all an impressive talent for painting pictures of the wild islands scenery . . . There's drama aplenty in this latest tale of Rhanna * Aberdeen Evening Express *
Christine Marion Fraser writes characters so real they almost leap out of the page . . . you would swear she must have grown up with them * Sun *
Rhanna is a great discovery. It wouldn't surprise us if one of the Hebridean islands changed its name to cash in on its fame * Glasgow Citizen *
An author who has won a huge audience for her warm, absorbing tale of ordinary folk * Annabel *

Christine Marion Fraser is one of Scotland's best-selling authors, outselling even Catherine Cookson, with world-wide readership and translations into many foreign languages. She is the author of the much-loved Rhanna series. Second youngest of a large family, she soon learned independence during childhood years spent in the post-war Govan district of Glasgow. Chris now lives in Argyll with her husband.

GOR001244220
A Rhanna Mystery by Christine Marion Fraser
Christine Marion Fraser
Used - Very Good
Paperback
Hodder & Stoughton General Division
2002-10-03
352
0340824107
9780340824108
N/A
Book picture is for illustrative purposes only, actual binding, cover or edition may vary.
This is a used book - there is no escaping the fact it has been read by someone else and it will show signs of wear and previous use. Overall we expect it to be in very good condition, but if you are not entirely satisfied please get in touch with us.