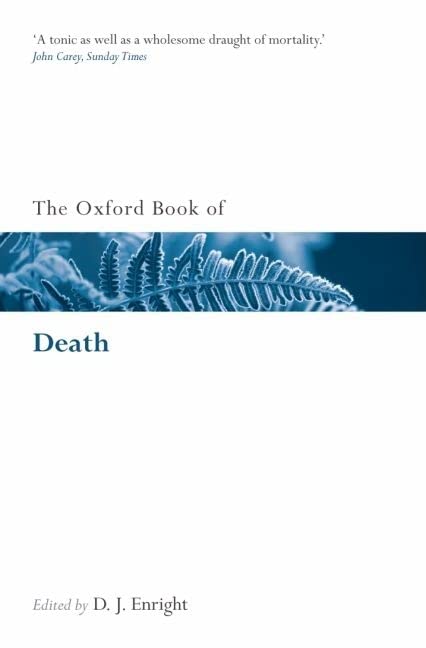 The Oxford Book of Death
by D. J. Enright (Poet and Literary Critic)

Used Price
$13.99
Free Shipping in the US
'Reading for this anthology,' says D. J. Enright in his introduction, 'I was moved to the thought that on no theme have writers shown themselves more lively.'
Reviews:
Trustpilot
Like New Very Good

The Oxford Book of Death Summary

The Oxford Book of Death by D. J. Enright (Poet and Literary Critic)

The inescapable reality of death has given rise to much of literature's most profound and moving work. D. J. Enright's wonderfully eclectic selection presents the words of poet and novelist, scientist and philosopher, mystic and sceptic. And alongside these 'professional' writers, he allows the voices of ordinary people to be heard; for this is a subject on which there are no real experts and wisdom lies in many unexpected places.

The Oxford Book of Death Reviews

D. J. Enright (1920-2002), poet, novelist, and critic, was born in Royal Leamington Spa, the son of a postman. He was educated at Leamington College and Downing College, Cambridge. His first collection of poetry, The laughing hyena and other poems was published in 1953. This was followed by an anthology Poets of the 1950s (1955) which gathered together the work of contemporary poets that became known as 'The Movement'. His own poetry was straightforward, sometimes ironic and almost in the style of light verse, often dealing with themes of inequality. In fiction, D.J. Enright recreated his own experiences of a British academic in a foreign country. His first novel, Academic Year (1955), has been compared with Kingsley Amis's Lucky Jim. Enright published several books for children, including the novels The Joke Shop (1976), Wild Ghost Chase (1978) and Beyond Land's End (1979).

GOR010757947
The Oxford Book of Death by D. J. Enright (Poet and Literary Critic)
D. J. Enright (Poet and Literary Critic)
Oxford Books of Prose & Verse
Used - Like New
Paperback
Oxford University Press
2008-10-09
368
0199556520
9780199556526
N/A
Book picture is for illustrative purposes only, actual binding, cover or edition may vary.
The book has been read, but looks new. The book cover has no visible wear, and the dust jacket is included if applicable. No missing or damaged pages, no tears, possible very minimal creasing, no underlining or highlighting of text, and no writing in the margins.