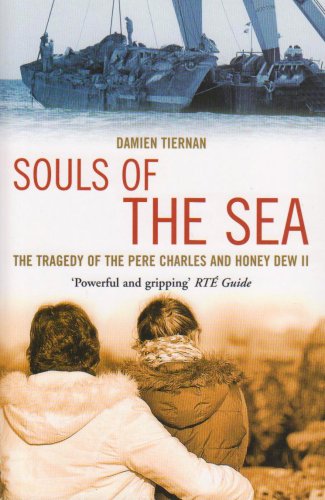 Souls of the Sea
by Damien Tiernan

Used Price
$9.99
Free Shipping in the US
In January 2007, in the space of six days, three large fishing boats sank off the south east coast of Ireland. Featuring interviews with survivors and with the families of the deceased, this is the story of courage, strength and community bound together.
Reviews:
Trustpilot
Very Good Good

Souls of the Sea Summary

Souls of the Sea by Damien Tiernan

In January 2007, within the space of only six days, three large fishing boats - the Pere Charles, the Honey Dew II and the Renegade - capsized and sank off the south east coast of Ireland. There were eleven crewmen on board the three vessels. In a tragic week, seven fishermen lost their lives in storm-force winds and waves.

In Souls of the Sea, Damien Tiernan gets to the heart of the tragedy that stunned Ireland and made headlines around the world. He talks to the families of those who drowned, as well as to the survivors from the sunken boats; to the rescue crews and weather forecasters, and to the ordinary people who turned out in their hundreds to search the shoreline for clues as to what happened.

A vivid picture emerges of brave and resourceful men and women who continue to forge unique communities in the face of adversity.

Souls of the Sea is a memorial to the seven men who were lost.

Customer Reviews - Souls of the Sea

Souls of the Sea Reviews

A powerful, gripping and clear-eyed account of a true and terrible tragedy * RTE Guide *
A heartwrenching and detailed account of a tragedy that enthralled a nation * U Magazine *
Heartbreaking story of the rescuers who tried to save the men and of the families they left behind. * Belfast Telegraph *
Damien Tiernan's book is heart-rending account of tragedy and loss. * Marine Times *

Damien Tiernan is a reporter for RTE, the Irish National Broadcaster

GOR001859414
Souls of the Sea by Damien Tiernan
Damien Tiernan
Used - Very Good
Paperback
Hachette Books Ireland
2008-05-08
320
0340952520
9780340952528
N/A
Book picture is for illustrative purposes only, actual binding, cover or edition may vary.
This is a used book - there is no escaping the fact it has been read by someone else and it will show signs of wear and previous use. Overall we expect it to be in very good condition, but if you are not entirely satisfied please get in touch with us.