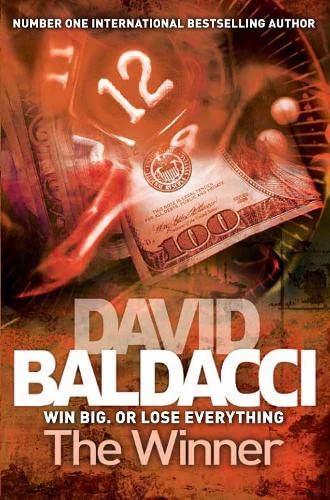 A fascinating thriller from one of the world's greatest storytellers

The Winner by David Baldacci is the taut tale of a woman forced to take a gamble with her future, from one of the world's bestselling thriller writers.

LuAnn Tyler is a single mother striving to escape a life of endless poverty. So when she gets a mysterious offer to be the guaranteed winner of the hundred million dollar lottery, it's like her prayers have been answered.

But LuAnn refuses - and less than twenty-four hours later she's fighting for her life and on the run from a false murder charge. The offer - and its condition that she leave the country forever - seems her only hope.

Ten years later, LuAnn secretly returns to the US to begin a new life with Matthew Riggs, a man whose origins are as murky as her own. But there are those who have picked up her trail - and it seems Matthew is the only one who can help her. But is he, too, closing in for the kill?

David Baldacci is the internationally-acclaimed author of multiple bestselling novels including Absolute Power,Total Control, The Winner, The Simple Truth, Saving Faith, Wish You Well, Last Man Standing, Christmas Train, Split Second, Hour Game, The Camel Club, The Collectors and Simple Genius. With his books published in at least 45 different languages, and with over 90 million copies in print, he is one of the world's favourite storytellers. His family foundation, the Wish You Well Foundation, a non-profit organization, works to eliminate illiteracy across America. Still a resident of his native Virginia, he invites you to visit him at www.DavidBaldacci.com, and his foundation at www.WishYouWellFoundation.org.
GOR003410555
The Winner by David Baldacci
David Baldacci
Used - Very Good
Paperback
Pan Macmillan
2011-11-04
592
0330545167
9780330545167
N/A
Book picture is for illustrative purposes only, actual binding, cover or edition may vary.
This is a used book - there is no escaping the fact it has been read by someone else and it will show signs of wear and previous use. Overall we expect it to be in very good condition, but if you are not entirely satisfied please get in touch with us
Trustpilot