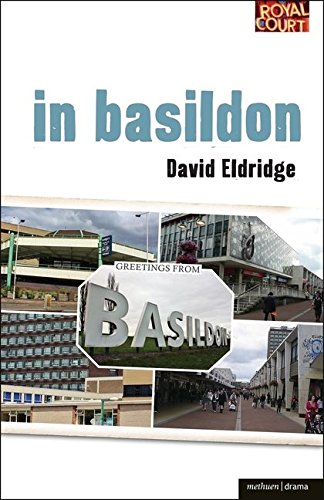 In Basildon
by David Eldridge

Used Price
$8.69
Free Shipping in the US
In Basildon is an epic family drama exploring inheritance and the myth of place.
Reviews:
Trustpilot
Very Good

In Basildon by David Eldridge

'People always get the wrong idea about Essex don't they?' Len's on his death bed and the family gather to say their final farewells. His sisters still aren't speaking after nearly 20 years, his nephew's trying for a baby - and a bigger house, while his best mate Ken remembers `Bas-vegas' when it was a village. As the spread is laid out and the ham sandwiches sit next to the wreaths, it's hard to see who's hungry and who's just greedy. In Basildon is full of explosive family dynamics and knotty relationships, embracing history, emotion and a strong sense of homeland. This depiction of indigenous Essex dwellers is uncompromising and at times harsh, but Eldridge also elicits deep sympathy for his characters as they face death, grief and crumbling familial bonds. The play is an epic family drama exploring inheritance and the myth of place.

Eldridge's exasperated affection and pitch-perfect observation..Coward laughed at his fellow social butterflies, with the same painful understanding. The comedy is at times considerable, as love, death, home and inheritance (can) spark passions. -- Libby Purves * Times *
Eldridge serves up something closer to Chekov - albeit with a meaty Essex twist..at times deeply poignant..Eldrige's script contains moments of pungent humour. Yet it's not just a chorus of guffaws. Instead of recycling stereotypes, he probes or shateers them..this is a piece packed with unsettling symmetries..In Basildon is scrupulously observed. -- Henry Hitchings * Evening Standard *
David Eldridge's In Basildon is a gloriously rich, humorous, agonising and politically provocative play.. Eldridge has a wonderful ear for dialogue..and he has an Ibsen-like gift for bringing to the surface the intricate emotional under-webbing of the past. -- Paul Taylor * Independent *
There is much dark humour in David Eldridge's new play - a journey into family dysfunction, class, envy, unforgiving anger and grief. Not natural subjects for laughter admittedly but so skilfully written..there are some highly comic touches. -- Paul Callan * Daily Express *
What makes In Basildon such a success is Eldridge's sharp and witty ear for demotic dialogue, and a cracking plot..with great skill, Eldridge brings to life a big family..The bickering, the shifting alliances and the great will-reading scene in this cleverly constructed four-act drama all combine sharp humour with dramatic clout. This is one of those too rare plays in which you really want to understand the secrets of the characters and learn what will happen next..Eldridge both knows and understands his flawed but far from contemptible characters, and there is an underlying compassion here that never curdles into sentimentality. -- Charles Spencer * Daily Telegraph *
He also has a good wry ear for dialogue. -- Quentin Letts * Daily Mail *
Eldridge is now one of our major playwrights. -- Ian Shuttleworth * Financial Times *
David Eldridge's riveting new play..the best play about British working-class life since Peter Gill's The York Realist..Eldridge's play has echoes of Arnold Wesker..(a) richly observant play. -- Michael Billington * Guardian *
David Eldridge's excellent play..treads a high wire line between compassion, comedy and criticism in a play that harks back to classic Royal Court working-class realism but is also vividly of today. -- Claire Allfree * Metro London *
This is a lively, eye-opening and genuinely fond portrayal of Essex man and family. -- Christopher Hart * Sunday Times *
Eldridge's In Basildon is a nuanced and affecting family drama. -- Mark Shenton * Sunday Express *
There are dozens of explosively funny lines. -- Kate Bassett * Independent on Sunday *
In Basildon, a play driven by politics..It is to Eldridge's credit that you realise this only afterwards. His dialogue is so corking that for much of the time In Basildon passes itself off as a richly enjoyable play about family dysfunction. -- Susannah Clapp * Observer *
Eldridge's play (is) brilliant. -- Caroline McGinn * Time Out London *
Eldridge has written a deeply political play about the barriers to working-class aspiration. But it is also a hilariously funny work. -- John Nathan * Jewish Chronicle *
In Basildon is a very funny, very dark family drama..Eldridge's razor-sharp ear bring(s) to vivid life rifts, rivalries and terrible tensions. -- Georgina Brown * Mail on Sunday *

David Eldridge was awarded the Time Out Live Award for Best New Play in the West End in 2001 for Under the Blue Sky. His recent credits include The Knot of the Heart (Almeida Theatre), The Stock Da'wa (Hampstead Theatre), The Lady From The Sea (Royal Exchange Theatre, Manchester), Market Boy (National Theatre) and Festen (Almeida and West End).

GOR003761738
In Basildon by David Eldridge
David Eldridge
Modern Plays
Used - Very Good
Paperback
Bloomsbury Publishing PLC
2012-02-15
128
1408164825
9781408164822
N/A
Book picture is for illustrative purposes only, actual binding, cover or edition may vary.
This is a used book - there is no escaping the fact it has been read by someone else and it will show signs of wear and previous use. Overall we expect it to be in very good condition, but if you are not entirely satisfied please get in touch with us.