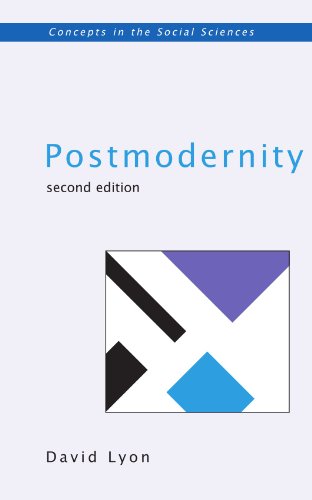 Used Price
$9.69
Free Shipping in the US
Shows postmodernity as the social condition of the twenty-first century. This book explores postmodernity as a theoretical concept and examines its historical roots and cultural dimensions. It pays attention to processes of globalization as well as to the postmodern view of cyberspace, cyborgs, and the body as a site of moral conflict.
Reviews:
Trustpilot
Very Good

"...written with enthusiasm and a commitment to clarity...Lyon shows that the employment of a sociological imagination can add new and unexpected depth to cultural analyses."
Keith Tester, University of Portsmouth

* What does 'postmodernity' mean? How does it help us grasp the meaning of 'modernity'? Is it better than similar terms such as 'high', 'late', 'reflexive' or 'radicalized' modernity?

* What are the enduring social consequences of the widespread diffusion of communication and information technologies and of consumer-oriented lifestyles?

* Does being postmodern mean that 'anything goes', or are values and beliefs still socially significant?

In the second edition of this highly successful text, postmodernity is seen as the social condition of the twenty-first century, in which some of the most familiar features of the modern world are not only called into question, but actually undermined by novel trends. The key carriers of the postmodern - new technologies and consumerism - emerged in thoroughly modern contexts, but so profoundly affect everyday social life that modernity itself is changing shape. Postmodernity is a way of describing a new society in-the-making without supposing that modernity has been entirely left behind. While some dub these changes as 'high' or 'late' modern, this book argues that 'postmodernity' best captures today's transformations of modernity.

Postmodernity is explored as a theoretical concept in order to uncover and illuminate central social trends of the present. Its historical roots and cultural dimensions are examined, as are the ideas of its leading theorists. In this updated and expanded edition, greater attention is paid to processes of globalization as well as to the postmodern view of cyberspace, cyborgs, and the body as a site of moral conflict.

"...written with enthusiasm and a commitment to clarity...Lyon shows that the employment of a sociological imagination can add new and unexpected depth to cultural analyses." - Keith Tester, University of Portsmouth

David Lyon is Professor of Sociology at Queen's University, Kingston, Ontario, Canada. He is the author of a number of books, including The Information Society (Polity, 1988), The Electronic Eye (Polity, 1994), Computers, Surveillance and Privacy (Minnesota, 1996) and his work has been translated into ten languages. He has held visiting positions at Wilfrid Laurier University in Canada, Leeds University in the UK, Calvin College in the USA and Ecole des Hautes Eutdes en Sciences Sociales, France.

Preface
Acknowledgements
Introduction
screen replicants and social realities
Postmodernity
the history of an idea
Modernity and its discontents
From postindustrialism to postmodernity
Consumerism
the shape(lessness) of things to come?
Postmodernity, /f003fin de millenaire/f001 and the future
Notes
Index.

GOR002510837
POSTMODERNITY SECOND EDITION by David Lyon
David Lyon
Used - Very Good
Paperback
Open University Press
1999-05-01
144
033520144X
9780335201440
N/A
Book picture is for illustrative purposes only, actual binding, cover or edition may vary.
This is a used book - there is no escaping the fact it has been read by someone else and it will show signs of wear and previous use. Overall we expect it to be in very good condition, but if you are not entirely satisfied please get in touch with us.