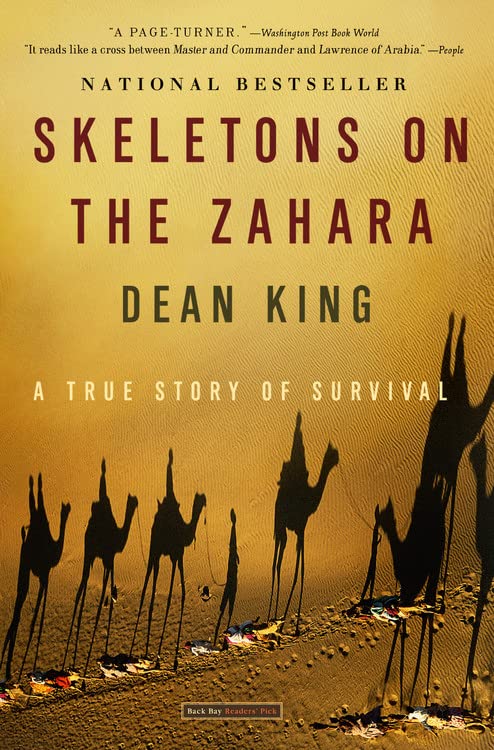 Skeletons on the Zahara
by Dean King

In Stock
$19.49
A crucial, forgotten chapter of American history--immortalized in a survivor's firsthand account that became one of the bestselling books in 19th-century America and influenced Abraham Lincoln's thoughts on slavery--is brilliantly retold for a new generation.
Very Good
Only 4 left

Skeletons on the Zahara Summary

Skeletons on the Zahara: A True Story of Survival by Dean King

Skeletons on the Zahara chronicles the true story of twelve American sailors who were shipwrecked off the coast of Africa in 1815, captured by desert nomads, sold into slavery, and subjected to a hellish two-month journey through the perilous heart of the Sahara.

The western Sahara is a baking hot and desolate place, home only to nomads and their camels, and to locusts, snails and thorny scrub -- and its barren and ever-changing coastline has baffled sailors for centuries. In August 1815, the US brig Commerce was dashed against Cape Bojador and lost, although through bravery and quick thinking the ship's captain, James Riley, managed to lead all of his crew to safety. What followed was an extraordinary and desperate battle for survival in the face of human hostility, starvation, dehydration, death and despair.

Captured, robbed and enslaved, the sailors were dragged and driven through the desert by their new owners, who neither spoke their language nor cared for their plight. Reduced to drinking urine, flayed by the sun, crippled by walking miles across burning stones and sand and losing over half of their body weights, the sailors struggled to hold onto both their humanity and their sanity. To reach safety, they would have to overcome not only the desert but also the greed and anger of those who would keep them in captivity.

From the cold waters of the Atlantic to the searing Saharan sands, from the heart of the desert to the heart of man, Skeletons on the Zahara is a spectacular odyssey through the extremes and a gripping account of courage, brotherhood, and survival.

Skeletons on the Zahara Reviews

""Dean King has brought to life one of the great true-life adventure stories--a riveting tale of suffering and redemption."

Dean King is the author of the national bestseller Skeletons on the Zahara. He has written for many publications, including Men's Journal, Esquire, Garden & Gun, Granta, Outside, New York Magazine, and the New York Times. He lives in Richmond, Virginia.

CIN000025480
Skeletons on the Zahara: A True Story of Survival by Dean King
Dean King
Used - Very Good
Paperback
Little, Brown & Company
2005-04-12
351
0316159352
9780316159357
N/A
Book picture is for illustrative purposes only, actual binding, cover or edition may vary.
This is a used book - there is no escaping the fact it has been read by someone else and it will show signs of wear and previous use. Overall we expect it to be in very good condition, but if you are not entirely satisfied please get in touch with us.