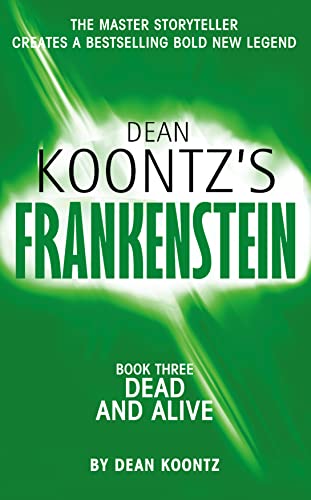 Dead and Alive
by Dean Koontz

Frankenstein lives! And so too does his monstrous creation ... but this creature of legend is a monster no more and his scarred face bears witness to his maker's wrath. His name is Deucalion.

As a devastating hurricane approaches New Orleans, Victor Helios, once know as Frankenstein, has unleased his benighted creatures onto the streets. As New Orleans descends into chaos, his engineered killers spin out of control, and the only hope rests with Victor's first and failed attempt to build the perfect human, whose damned path has led him to the ultimate confrontation with his pitiless creator.

But first, Deucalion must destroy a monstrosity not even Victor's malignant mind could have imagined - an indestructible entity that steps out of humankind's collective nightmare with one purpose: to replace us.

This is a powerful reworking of one of the classic stories of all time.

`Velocity hits its pace from the first page and races through to a suitably climactic ending.' Sydney Sunday Telegraph

`Dean Koontz is not just a master of our darkest dreams, but also a literary juggler.' The Times

`If Stephen King is the Rolling Stones of novels, Koontz is the Beatles.' Playboy

GOR001221444
Dead and Alive (Dean Koontz's Frankenstein, Book 3) by Dean Koontz
Dean Koontz
Dean Koontz's Frankenstein
Used - Very Good
Paperback
HarperCollins Publishers
2009-08-06
400
000720311X
9780007203116
N/A
Book picture is for illustrative purposes only, actual binding, cover or edition may vary.
This is a used book - there is no escaping the fact it has been read by someone else and it will show signs of wear and previous use. Overall we expect it to be in very good condition, but if you are not entirely satisfied please get in touch with us.