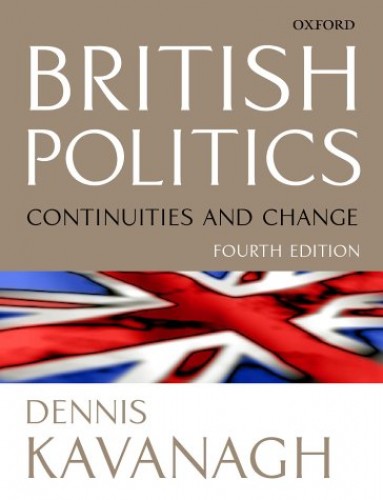 In Stock
$9.69
Provides a concise introduction to British Politics. This text covers the core elements of an undergraduate course, providing an introduction to politics and the system of government in Britain. It includes an assessment of the first three years of Labour government, and the issues surrounding devolution and constitutional change.
Very Good Good
Only 1 left

This successful and highly regarded textbook provides a concise introduction to British Politics. Dennis Kavanagh's revised and fully updated text covers all the core elements of an undergraduate course, providing an up-to-date introduction to politics and the system of government in Britain. New topics include an assessment of the first three years of Labour government, and the issues surrounding devolution and constitutional change. Contemporary developments are placed in their historical context, allowing an understanding of the ways in which the politics of the 1980s and 1990s have shaped and affect current issues. Kavanagh's thorough and balanced analysis of the British political system is combined with boxed examples, chapter summaries, and guides to further reading making it easily accessible to introductory students whilst encouraging critical thinking. A new text design and student-friendly learning aids enhance the clear and lively writing style, stimulating readers' interest and encouraging independent assessment of the key issues and debates in the study of British government and politics.

Dennis Kavanagh is Professor of Politics at the University of Liverpool. He has written numerous books on British Politics, including The Powers behind the Prime Minister (Harper Collins, 1999) and British Politics Today 6/e (Manchester University Press, 1998).

GOR001247487
British Politics: Continuities and Change by Dennis Kavanagh
Dennis Kavanagh
Used - Very Good
Paperback
Oxford University Press
2000-08-31
379
0198782705
9780198782704
N/A
Book picture is for illustrative purposes only, actual binding, cover or edition may vary.
This is a used book - there is no escaping the fact it has been read by someone else and it will show signs of wear and previous use. Overall we expect it to be in very good condition, but if you are not entirely satisfied please get in touch with us.