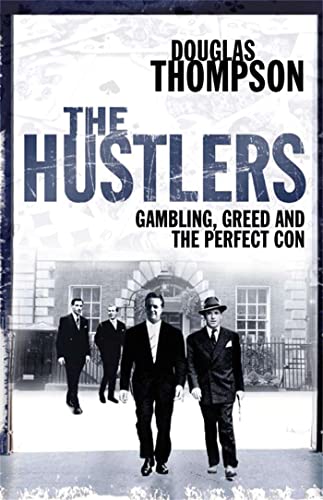 The Hustlers
by Douglas Thompson

In Stock
$8.39
A racy, entertaining story of gambling, greed and the perfect con.
Very Good
6 in stock

The Hustlers: Gambling, Greed and the Perfect Con by Douglas Thompson

Invitations to John Aspinall and John Burke's illegal gambling parties were the most sought after in 1950s London - only the wealthy and well-connected were allowed past their door. When the police finally arrested them, Aspinall and Burke challenged the law - and won. As a result gambling was legalised. Which interested crime boss Billy Hill and his lieutenant Bobby McKew, because suddenly clubs sprang up everywhere and Billy had a foolproof way of fixing the cards. He also had his eye on the ultimate prize, Aspinall's exclusive new club, The Clermont...

Revealing for the first time how Aspinall and Hill plotted to steal a fortune, based on testimony from Burke and McKew, The Hustlers is a riotous journey back to 50s and 60s London. With a cast of characters that ranges from safecracker Eddie Chapman to the reckless Earl of Derby, from croupier Louis the Rat to unlucky Lord Lucan, it vividly recreates the exploits of the gamblers and gangsters whose lives collided in the clubs and pubs of Mayfair.

'a fascinating glimpse into a bygone world . . . when chemmy parties took London by storm and toffs were often found to be rubbing shoulders with gangsters' Daily Express

Douglas Thompson is the bestselling author of more than twenty books. A biographer, broadcaster and international journalist, he is a regular contributor to newspapers and magazines worldwide.

GOR001241933
The Hustlers: Gambling, Greed and the Perfect Con by Douglas Thompson
Douglas Thompson
Used - Very Good
Paperback
Pan Macmillan
2008-02-01
288
0330449516
9780330449519
N/A
Book picture is for illustrative purposes only, actual binding, cover or edition may vary.
This is a used book - there is no escaping the fact it has been read by someone else and it will show signs of wear and previous use. Overall we expect it to be in very good condition, but if you are not entirely satisfied please get in touch with us.