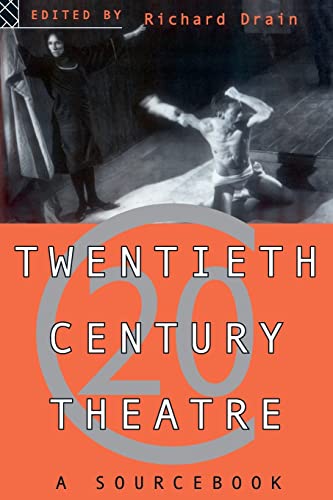 Twentieth Century Theatre: A Sourcebook
by Edited by Richard Drain

Twentieth Century Theatre: A Sourcebook by Edited by Richard Drain

Twentieth Century Theatre: A Sourcebook is an inspired handbook of ideas and arguments on theatre. Richard Drain gathers together a uniquely wide-ranging selection of original writings on theatre by its most creative practitioners - directors, playwrights, performers and designers, from Jarry to Grotowski and Craig. These key texts span the twentieth century, from the onset of modernism to the present, providing direct access to the thinking behind much of the most stimulating theatre the century has had to offer, as well as guidelines to its present most adventurous developments.
Setting theory beside practice, these writings bring alive a number of vital and continuing concerns, each of which is given full scope in five sections which explore the Modernist, Political, Inner and Global dimensions of twentieth century theatre.
Twentieth Century Theatre: A Sourcebook provides illuminationg perspectives on past history, and throws fresh light on the sources and development of theatre today. This sourcebook is not only an essential and versatile collection for students at all levels, but also directed numerous devised shows which have toured to theatres, schools, community centres and prisons.

"The selections are wide-ranging, historically informed, judicious ... the commentary by Drain is marked by its fluency and unpretentiousness.."
-Herbert Blau, University of Wisconsin
"A broad and balanced survey of writings on the theatre by some of its most innovative artists and theorists ... From the most strident manifesto to the most decorous plea, this guide provides both a sketch of this century's stage history as well as a useful resource for scholars interested in the status of theatre and performance within the past 100 years."
-"American Theatre

GOR001234061
Twentieth Century Theatre: A Sourcebook by Edited by Richard Drain
Edited by Richard Drain
Used - Very Good
Paperback
Taylor & Francis Ltd
1995-10-26
408
0415096200
9780415096201
N/A
Book picture is for illustrative purposes only, actual binding, cover or edition may vary.
This is a used book - there is no escaping the fact it has been read by someone else and it will show signs of wear and previous use. Overall we expect it to be in very good condition, but if you are not entirely satisfied please get in touch with us.